Patent applications from Republic rose 21% in 2018 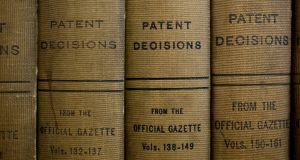 The Republic was ranked by the European Patent Office in 21st place out of 40 countries in terms of the volume of patents filed. Photograph: Andrew Harrer/Bloomberg

Patent applications filed with the European Patent Office (EPO) from the Republic rose by more than 21 per cent last year, new figures show.

This was the strongest growth in patent applications in a decade and was markedly higher than the 3.8 per cent average growth recorded by the 38 EPO member states.

Overall, the EPO received 174,317 European patent applications last year, an increase of 4.6 per cent compared to 2017. Of these, 801 applications were from the Republic, a record number, and a sharp rise on the 660 filed a year earlier.

Self-driving technology provider Aptiv Technologies, which relocated its global headquarters to the Republic from the UK last year, was responsible for just more than a quarter of all Irish patents filed, with 207 applications in total. It was followed by Dublin-headquartered consulting giant Accenture with 100 applications.

Cork-based probiotic treatment company Alimentary Health, the University of Ireland Galway and the University of Limerick round-up the leading organisations in terms of patent applications filed from the State in 2018.

Overall, the Republic was ranked in 21st place out of 40 countries in terms of the volume of patents filed. The US was the leading country with 43,612 patents, equivalent to 25 per cent of all applications. It was followed by Germany, Japan, France and China which recorded its lowest growth rate in five years.

Some 27 per cent of all applications filed from the Republic were focused on medtech, which was also the most popular technical field for patents globally last year.

“In terms of patents, 2018 was a very positive year for Ireland,” said EPO president António Campinos.

“Reaching the highest growth rate among the largest patent-filing countries is not only a testimony to Ireland’s strength in innovation and R&D, but also a recognition of the value of patents in protecting intellectual property, driving innovation and generating jobs and income,” he added.

Siemens was the top patent applicant at the EPO in 2018 with 2,493 applications in total. It overtook Huawei, which came in second place overall, with Samsung, LG and United Technologies rounding out the top companies in terms of applications filed.

5 Not everyone laughing as Leave.EU makes Waterford home