Barnier says teams will continue to work ‘within guidelines’ 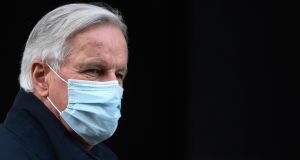 EU chief negotiator Michel Barnier: he has had to go into self-isolation after one of his Brexit negotiating team tested positive for Covid-19. Photograph: Daniel Leal-Olivas/AFP via Getty Images

Talks between the European Union and the UK have been temporarily suspended after a negotiator tested positive for Covid-19, upending the talks at a crucial moment as the two sides race to reach a deal.

“One of the negotiators in my team has tested positive for Covid-19,” the chief EU negotiator, Michel Barnier, announced. “We have decided to suspend the negotiations at our level for a short period. The teams will continue their work in full respect of guidelines.”

Chief British negotiator David Frost said the two were in “close contact” about the situation, and said “the health of our teams comes first”.

Both sides had indicated that the coming seven days could be the last time in which a deal could be reached in time for it to be ratified and implemented by January 1st, with billions of euro in trade at stake.

There had been signals that a breakthrough could be possible early next week, although it is now unclear whether that still stands.

The teams were engaged in intense negotiations in Brussels to try to break a deadlock over fishing rights, what authority should resolve disputes, and how to create fair competition conditions for companies.

Mr Barnier had been expected to update EU states on progress in the negotiations on Friday. He must now begin self-isolation, but will keep in close contact with his British counterpart Mr Frost remotely.

A British government spokeswoman said London was in discussions with the EU Commission over “the implications for the negotiations”.

“We have been and will continue to act in line with public health guidelines and to ensure the health and welfare of our teams,” the spokeswoman said.

Some 50 British officials are in the Belgian capitals for the talks, which have for now been moved entirely online.

Just seven weeks remain until a deal must come into force, a time in which the deal document – likely to run to hundreds of pages – must be translated into EU languages and scrutinised by members of the European Parliament.

The approval of MEPs is required for any agreement to become law, and they have warned that they will not simply “rubber stamp” the deal and will require time to scrutinise it properly.

A deal would duck the requirement for punishing tariffs on a wide range of goods and help relations between the two sides to remain positive, although hauliers and transport companies expect disruption to imports and exports to Britain due to the requirements for declarations and checks even if a deal is reached.

The talks were previously disrupted in March when Mr Barnier himself caught Covid-19, requiring his team to go into isolation.