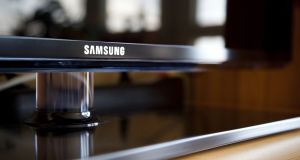 Watching the detectives? A range of Samsung televisions are among the smart devices which, according to WikiLeaks data, are vulnerable to CIA malware. File photograph: Getty Images

Perhaps you own a Samsung smart TV and have been the unwitting star of a Spook-style Gogglebox in reverse, with the US Central Intelligence Agency eavesdropping on those discreet couch chats as you watch the Late Late Show.

One of the more headline grabbing things to emerge from this week’s WikiLeaks data dump about the CIA was the revelation that it – with MI5 assistance – devised ways to spy on people through their internet-connected televisions.

More than four years ago the agency developed ways to listen in on private conversations using a piece of malicious software, or malware, which exploited Samsung’s Fake Off mode.

Once activated, the code produces the false impression that a television is turned off, thus enabling audio to be captured – and perhaps movement also – in the room.

The hack, codenamed Weeping Angel – in a reference to the BBC character Doctor Who – does not apply to all Samsung televisions. Unless your model dates from 2012 or 2013 and has firmware versions 1111, 1112, and 1116, you are probably in the clear

However, there is a pretty good chance it was not.

For a start, as far as we know, the malware could only infiltrate a TV via a USB key, which means an agent would have had to come into your home and set it up. Although it is also possible the CIA developed remotely controlled infection techniques.

Another reason you are likely to be in the clear is that the CIA almost certainly developed the TV hack to target specific individuals. It is not thought to have been using it as part of a widespread surveillance operation.

If you want to be sure, however, you will need to check – and then update – the firmware on your TV. To do that just go to the main menu, select Support, and then Software Update.

Of course, the CIA might still be one step ahead of you and may have developed a work around for the blue LED and other ways to get into your home. And if are still concerned, then you could disconnect your smart TV from the internet which would make it a stupid television again.

Or you could just unplug it.