AIG chooses Luxembourg over Dublin as post-Brexit EU base 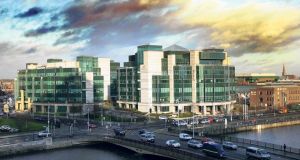 AIG Ireland is based in the IFSC. Dublin finished as runner-up to Luxembourg as the insurer’s choice of location for its post-Brexit European regional headquarters. Photograph: Bryan O’Brien

Hopes that global insurance giant AIG might relocate its European regional headquarters to Dublin from London following the UK’s decision to quit the European Union have been dashed, with Luxembourg selected for the switch.

It is understood Dublin finished as runner-up to Luxembourg from a shortlist of locations across Europe the American insurer considered.

The IDA and the Government made a strong pitch to AIG for Dublin to become its new regional headquarters and there will be disappointment that the investment was not secured.

AIG Europe chief executive Anthony Baldwin wrote on Wednesday to Minister of State for Financial Services Eoghan Murphy to thank him for his engagement with the firm last year as it weighed up its post-Brexit options.

Mr Baldwin told the Minister of State he had been “extremely impressed” by the rigour and experience of the Central Bank and was grateful for the insights shared with the company.

“Our Irish business will continue to focus on growth and on meeting the needs of our customers in the Irish market,” he said. “Ireland has much to offer the insurance sector as our industry adapts to the future.”

AIG employs about 400 staff in Ireland, across a range of activities including property casualty, IT, treasury and asset management. It also owns health insurer Laya, which is number two in the the market to State-owned VHI and has more than 450 staff.

In a statement issued on Wednesday, AIG said the move to Luxembourg would ensure the “continued smooth operation of its business across the European Economic Area [EEA] and Switzerland” once the UK leaves the EU.

From 2019, AIG proposes to have two subsidiary insurance companies in Europe – one in the UK to write local business and one in Luxembourg to write EEA and Swiss business, which will have branches across the region.

AIG currently writes business in Europe from a single insurance company based in the UK, AIG Europe Limited.

The UK is AIG’s largest single operation in Europe. The company said it would continue to support its European operations from the UK, which is a core market where it will continue to invest and grow.

Mr Baldwin described it as a “decisive move” by the insurer. “AIG sees opportunity in the ongoing resilience of the UK insurance market,” he said. “At the same time we are ensuring that our clients and partners experience no disruption from the UK’s EU exit. Our Luxembourg company will be complementary to our existing structure and will be part of our single European module.”

1 ‘I hate haggling because I hate when people do it to me’
2 Institutional investors spend €470m on residential properties in latest quarter
3 Monsoon landlords win challenge over creditors arrangement that cut rents
4 Irish elearning company LearnUpon closes €47.4 million investment
5 Covid-19 has shown that much of ‘normal’ life should have been binned years ago
6 Economists warn GDP will fall again because of Level 5 restrictions
7 Irish house prices could buck European trend and fall this year, says S&P
8 Investors should ignore Gundlach’s guessing game
9 Prominent Dublin pub baron’s group to open other new boutique hotels in 2018
10 Streaming services set for Christmas battle after drama-filled year
Real news has value SUBSCRIBE