Short-sellers may have burst bitcoin bubble 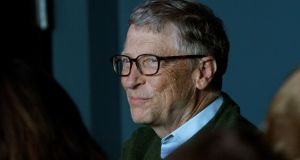 Microsoft co-founder Bill Gates said he would short bitcoin if there was an easy way to do it. Photograph: Rick Wilking/Reuters

Bill Gates last week said he would short bitcoin if he could, prompting early bitcoin investor Tyler Winklevoss to point out that anyone who wants to bet against bitcoin has been able to do so since bitcoin futures trading began last December. “Put your money where your mouth is,” tweeted Winklevoss. That may not be wise. After all, there is, as Bloomberg’s Matt Levine points out, “no convenient way to express the view that ‘bitcoin will eventually go to zero but I have no idea what these crazy kids will get up to for the next few years’.” Still, many traders are prepared to bet against the cryptocurrency. That willingness, now facilitated by futures trading, may have burst the bitcoin bubble, according to new Federal Reserve Bank of San Francisco research.

Many believed futures trading would boost bitcoin prices. Consequently, prices tripled between its announcement on October 31st and the launch of futures trading on December 17th. Instead, prices peaked that same day and have since more than halved. Speculative demand “came only from optimists” prior to the launch of futures trading, the Fed notes. Pessimists “had no mechanism available to put money behind their belief that the bitcoin price would collapse” and “were left to wait for their ‘I told you so’ moment”. That all changed on December 17th – the day short-sellers finally got to bet against the bitcoin bubble.

Is this long correction a ‘cause for concern’?

Stocks have recovered lost ground recently, recently hitting eight-week highs. Bulls might be thinking that it’s about time too. When stocks corrected 12 per cent in January-February, many observers noted the historical norm was for equities to quickly rebound. However, that didn’t happen. The duration of the current correction – 3½ months – is very long for a relatively modest correction, says the Leuthold Group’s Doug Ramsey. Looking at every correction since 1950 that didn’t exceed a decline of 12 per cent, he found the current one is the second longest. “This tardiness is cause for concern in and of itself,” says Ramsey. “While old age alone may not kill a bull market, ‘morbidity’ climbs rapidly the longer a correction lingers.” Indices’ ongoing struggles might suggest the fundamental concerns that triggered market anxiety are persisting, as opposed to fading. Still, one could equally argue a period of consolidation is healthy, given that bullish sentiment hit such extremes in late 2017 and early 2018. The duration of the current correction means that excess has now been wrung out of the market, while rising earnings have ensured valuations now look more reasonable than a few months ago, potentially setting markets up for a new leg higher.

Stocks have enjoyed many rallies in recent months only for gains to prove short-lived as sellers re-emerged. However, the recent decline in volatility will encourage bulls hoping equities are about to build on recent gains. Volatility was amazingly subdued throughout 2017. The Vix, or fear index, hit all-time lows of 9.14, less than half its long-term average. Volatility then erupted in late January. The Vix quadrupled, hitting 37.32 – a level associated with times of crisis – on February 5th, and stock prices have continued to swing about wildly in recent months. Last week, however, the Vix fell below 14 for the first time in four months. It continued to fall over the following days, despite increased geopolitical tensions in Iran and Israel. That augurs well over the short term; since 1990, when the index fell below 14 after spending at least three months above it, prices typically rise over the following weeks, according to data from SentimenTrader’s Jason Goepfert. It’s too early to say if volatility will continue to fall, but bulls will view the changed environment as further evidence that calm is returning to markets.

High earnings and the ‘beast of burden’

Commentators continue to be perplexed as to why stock markets have shrugged off record earnings from US companies. “The stock market’s reaction to earnings is all wrong,” a Bloomberg headline read last week. The piece, written by US money manager Charles Lieberman, opined it had become “shockingly common this earnings season for companies to report better-than-expected profits only to see their share prices fall”. There are, said Lieberman, “many explanations but none make much sense”. Maybe, but the simplest explanation – that good news and much more was largely priced in as stocks soared higher in late 2017 and early 2018 – remains the best one, judging by Ned Davis Research data cited by Schwab’s Liz Ann Sonders. She notes that, historically, stocks have actually delivered the best returns in years where earnings were falling. Annualised gains have been decidedly modest in years where earnings growth topped 20 per cent, averaging just 2.6 per cent. As a general rule,the quicker profits grow, the worse stocks perform. “Be careful what you wish for,” says Sonders; a high earnings bar can become a “beast of burden”.