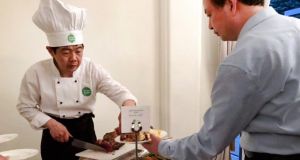 At a reception at the Irish embassy in Beijing, Irish beef was served for the first time since a ban was imposed in 2001 on EU beef imports over BSE. The ban was formally lifted in April.

Three Irish beef plants and one pork plant have had access to the Chinese market confirmed during a trade mission to China led by Minister for Agriculture, Food and the Marine Michael Creed.

At a reception at the Irish Embassy in Beijing, Irish beef was served for the first time since a ban was imposed on EU beef imports over mad cow disease, or BSE, in 2001. The ban was formally lifted in April.

On the first day of his week-long mission, Mr Creed met his Chinese counterpart Han Changfu and the minister for a new agency, the State Market Regulatory Administration, Zhang Mao.

“It’s about the trade but it’s also about deepening our relationship with the Chinese market,” Mr Creed said at a briefing at the Irish Embassy. “It’s an exciting opportunity, the market is enormous.

For beef, it’s the beginning of what I hope can become a very significant market for us.”

The Minister said he could not reveal which plants had been approved, as protocol demanded the Chinese authorities do so. Firms awaiting approval include Kepak Clonee, Kildare Chilling, Liffey Meats, Dawn Meats in Cork and ABP Food Group in Nenagh, Co Tipperary.

It brings to six the number of Irish beef plants that will initially be allowed to export beef.

While acknowledging that the market is dominated by Latin American, Australian and New Zealand producers, and that Irish beef plants are the newcomers, Mr Creed said major opportunities were there.

Ireland and China have also established a high-level agriculture working group as part of a comprehensive partnership in agriculture, which will exchange information on food safety, sustainability, livestock production and rural development.

Mr Creed said there had also been preliminary discussions around the issues of approval for additional plants as well as the prospect of sheep meat access.

Irish pig meat has been allowed in China for a decade and China is now the second-largest export market for Irish pig-meat firms. Pig-meat exports amounted to more than €100 million in 2017.

Demand for meat in China has quadrupled in the past 30 years and China now consumes a quarter of the world’s meat supply.

“Given that on dairy and pork China has become our second-biggest market, it gives you some indication of how big a market it could become,” he said.

Bord Bia chief executive Tara McCarthy said the agency was recruiting to expand the Chinese market and was looking at opportunities such as the online market – the majority of meat sold online in China is beef.

“It will become our second-biggest market. We are looking to deepen the market and deepen our understanding,” she said, adding that Bord Bia wanted to “give ourselves the opportunity to get the product tasted as much as possible”.

“We see Kingpeng Husbandry as an ideal long-term partner for our dairy technology, they have excellent knowledge of the dairy industry,” said Mr O’Meara.

1 Cosgrave should give his speech to Web Summit’s partners in Saudi Arabia
2 Ryanair wants Irish courts to block Skyscanner from selling its flights
3 Paschal’s pitch is based on the economy, Brexit and Project Ireland 2040
4 Election proposals may make the housing crisis worse
5 Who are Ireland’s 17 billionaires?
6 Tesco UK moves to scrap 350m tonnes of plastic per year
7 Davos 2020: Worlds of Trump and Thunberg collide on a Swiss mountainside
8 Court dismisses part of action over claim of ‘catastrophic losses’ on pension schemes
9 Dear prudence, Thunberg vs Trump and patience is a virtue
10 ‘We get on with things despite the politicians’
Real news has value SUBSCRIBE