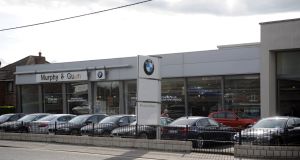 Murphy and Gunn BMW garage in Milltown, Dublin. It’s believed Murphy and Gunn is seeking to retain a servicing and repair contract with the car firm. Photograph: Aidan Crawley

High-profile south Dublin car dealer group Murphy & Gunn is expected to end its franchise deal with BMW after nearly 50 years. It is believed the move is just the first in a number of changes within BMW’s Irish dealer network that will see other well-known outlets leave the brand.

The German premium car giant has 14 dealers in its Irish network, but franchise contracts expire at the end of September. BMW is currently in negotiations with dealers about its future network arrangements. According to industry sources, other BMW dealers are likely to leave the network by October.

The departure of Murphy & Gunn, which was one of the first BMW dealers in the Republic, would leave Frank Keane as the sole BMW franchised retail dealer in south Dublin.

It’s believed Murphy & Gunn is seeking to retain a servicing and repair contract with the car firm, and plans to retail used premium cars from its current BMW premises on Milltown Road, Dublin 6. Murphy & Gunn will also remain a franchised Hyundai dealer at its other facility on Rathgar Avenue. Management did not return calls from The Irish Times.

The premium car brand currently has a market share of 3.3 per cent, with 2,670 sales. That is down 17.8 per cent on the same period last year. It’s Mini brand has recorded sales of 298 cars this year, which is up 6.4 per cent on last year.

Like all car firms in the Republic, BMW has suffered from the influx of used imports from the UK on the back of the weak sterling exchange rate. While the total number of used imports is up 13 per cent on last year, at 37,935, BMW has witnessed a 46 per cent increase in used imports of cars from its brand.

As of May 10th, 2,095 used BMWs have been imported this year. A further 340 Minis were imported over the same period.