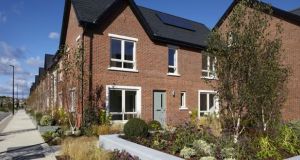 Parkside on the Malahide Road, where Cairn Homes has just launched a range of apartments and duplexes from €285,000.

New home price growth may be lagging someway behind that of second-hand homes, but increases in new developments may be sharper than expected, new research shows.

Latest figures from the Central Statistics Office shows that house prices grew at a rate of almost 13 per cent in the year to March; however the pace of growth of new homes has been lower, despite the introduction of the Help to Buy scheme in 2017, which gives first-time buyers a tax rebate of 5 per cent of the purchase price of a new property.

Figures from Sherry Fitzgerald indicate that the price of new homes in Dublin actually fell by 3 per cent in 2017, while last year Cairn chief executive Michael Stanley said the Help to Buy scheme was not driving new home price growth. However, an analysis into Cairn Homes by Investec shows that since then, price inflation has started to catch fire in the new homes market too.

According to the broker, at Parkside on the Malahide Road, where Cairn has completed 350 units and is currently readying the launch of duplex and apartments, the average price of a three-bed property has risen by 7 per cent over the year from the first quarter of 2017 to the same period in 2018. Three-bed semi-detached homes are currently selling for €375,000 - up by some 25 per cent on the €299-€325,000 price range at which they were launched back in September 2015.

At the Churchfields development in Ashbourne, Co. Meath, three-bed homes again rose by about 7 per cent over the period, with four-beds lagging at 5 per cent.

Away from first-time buyer market however, Investec points to Cairn’s assertion of greater inflationary pressures at its higher-priced sites, such as Marianella in Rathgar, where three bed apartments were sold for more than €700,000. While the data is not yet there to compare, as most of the units at Marianella were pre-sold back at the end of 2016, early sale prices are still 8 per cent ahead of Investec’s expectations.

While Cairn is targeting sales of some 1,300-1,400 a year by 2020, Investec however doesn’t expect Cairn to meet its target for 2018. As such, it expects the homebuilder to complete 812 units in 2018, down from 886 previously, but expects output to jump to 1,103 in 2019, up from its previous forecast of 989. The fall in completions in 2018 is down to a number of factors, including delays at Clonburris in Lucan due to modifications to the area’s Strategic Development Zone (SDZ), and similar issues at Cherrywood, in south Dublin.