What does it mean to shop local in Covid-19 era?

Cantillon: ‘Conscious efforts’ to support local businesses won’t mean the same to all 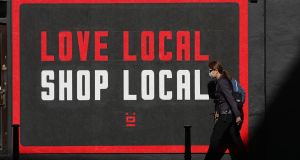 Anyone obliged to comply with travel restrictions in their area, for example, will be more likely to ‘support’ the nearest cafe to their home. Photograph: Nick Bradshaw

Seven in 10 Irish adults have “made a conscious effort” to support local businesses due to the impact of Covid-19, a nationally representative survey by iReach has found. The figure, which tipped slightly higher for respondents from Munster and for people aged 55-plus, seems to reflect well on the public’s understanding of the reality that you either use it, or you lose it.

Too often when a business shuts down triggering an avalanche of hand-wringing and regret, the logic of its closure suggests that rather than being much-loved, the struggling business would be best described as being once-loved. The unfortunate truth is that shops, cafes, restaurants or pubs that enjoy a magical period of cut-through with a generation of enthusiastic patrons can later lose their relevance, despite continued hard work. “Use it or lose it” plus time can equal “you don’t know what you’ve got til it’s gone”.

The first wave of permanent closures in this pandemic has been even more dispiriting. Businesses that were only viable six months ago are now unable to survive. Smaller businesses with thinner financial cushions have been forced to give up rather than limp their way into debt, though large multinational chains with accountants in distant head offices have not been shy about cutting their cloth either.

This brings up the question of what it means to shop “local” in any case. Does it mean hyper-local, as in down the road, or just in any bricks-and-mortar store located in Ireland, rather than succumbing to the quick clicks of Amazon?

For different people the word local will mean different things. Not every geographically proximate outlet is locally owned, nor is every local area blessed with a full complement of friendly independents – what the Americans call the “Mom-and-Pops”.

Anyone obliged to comply with travel restrictions in their area, for example, will be more likely to “support” the nearest cafe to their home, regardless of whether that’s a Costa Coffee (owned by the Coca-Cola Company) or a dinky indigenous operation. If there’s a choice, great. But often it will be one or none.

Complicating consumers’ desire to be supportive is the lack of awareness and/or transparency about who owns what. Some big corporations have previously exploited the vogue for “virtuous” spending in standalones by opening outlets with heavily disguised “indie” shopfronts and unbranded interiors. It’s a phenomenon that may see a resurgence in the Covid-19 era.