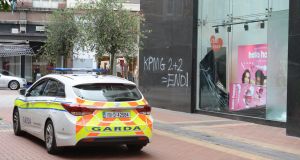 Former Debenhams workers who occupied shops in Dublin and Cork this morning have been told a proposed €1 million redundancy offer is no longer available to them.

Gardaí confirmed that six people had been arrested for trespassing under the Public Order Act during an incident at Henry Street in Dublin this morning. Gardaí said they were also investigating an alleged act of criminal damage at the same premises.

Those staging the sit-ins have been asked to leave the company’s Henry Street shop and also to vacate another outlet on Patrick Street, Cork, where former staff are also protesting.

Speaking to The Irish Times as she was escorted from the building, Jane Crowe accused the workers’ trade union, Mandate, of doing a deal with the Debenhams liquidator behind their back.

In a statement issued to the media as the former workers went into the Dublin shop and another in Patrick Street, Cork, the workers said they wanted “a just settlement of four weeks’ redundancy pay per year of service”.

Trade unions have urged the Government to introduce a statutory scheme under which the State would pay workers enhanced levels of redundancy payments provided for in collective agreements in cases involving companies that go into liquidation, such as Debenhams.

The State could then seek to recover the costs involved, possibly from the sale of assets, while there could also be a levy introduced on other employers, the unions said.

Ictu general secretary Patricia King stated in the letter that unions were acutely aware of future pressure on the Social Insurance Fund, out of which such enhanced redundancy payments would come.

“In that regard, we have examined best practice in these matters operating in European countries such as Germany, France and Austria, all of whom have established levy funds on private-sector employers for such purposes, with contribution rates ranging from 0.66 per cent to 0.3 per cent.

The statement from the protesting workers described the settlement offer they received late last week as an “insult” and have expressed “extreme disappointment” at the failure of the Government to provide workers with “a fair offer”.

Valerie Conlon, shop steward at the Patrick Street outlet in Cork, and one of those who took part in the Cork sit-in, said: “ Instead of providing two weeks per year of service on top of the statutory minimum, the offer provides for an extra one day’s pay per year of service. That is a real insult.”

Liquidator KPMG said an offer to provide a fund of €1 million to about 1,000 workers on top of statutory redundancy payments could now be considered “withdrawn”.

KPMG said: “Following the actions of certain people overnight it has now become clear that the offer is not acceptable to the former employees and others.

“No further settlement agreements will be negotiated by the liquidators with the former employees.”

Mandate said it was disappointed that the redundancy settlement offer had been withdrawn.