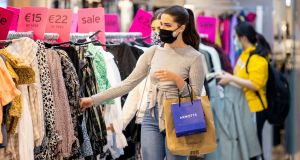 ‘We need to encourage shoppers into shops early this Christmas. We need to spread it out.’ Photograph: Tom Honan

Retail representatives are warning that certain categories, such as men’s fashion, could experience stock shortages of some brands during the upcoming Christmas shopping season due to the impact of coronavirus on supply chains.

Retail Excellence, an industry group with more than 2,000 members, says independent retailers may have difficulty this Christmas sourcing stock from some major international fashion brands whose production was hit earlier in the year by Covid-related factory closures in Asia and Europe.

The organisation says some fashion brands also cancelled huge production orders at their factories when economic uncertainty from the virus outbreak was at its height. As sales have picked up since then, this has forced some brands to begin rationing supply for their own retail networks, limiting supply to independent stores.

One global men’s apparel brand is understood to have told independent Irish retailers they would only receive 30 per cent of their orders for the Christmas season. Other big brands have cancelled orders from retailers altogether.

Duncan Graham, the lobby group’s chief executive, said some retailers were now also playing catch-up after their buyers acted conservatively when the economic impact of the virus was still being gauged.

“When buyers were putting in orders earlier in the year they were being very cautious,” he said. “This will lead to some stock shortages, though we hope not a massive amount.”

Outside of the fashion sphere, retailers in sectors such as hardware are also warning of impending stock shortages, especially in everyday goods that rely on components such as metals processed in Chinese factories.

United Hardware, a buying group of more than 150 Irish hardware shops, says its network’s sales are “performing strongly” through the pandemic.

“However, we are starting to see consumer demand being undermined by reduced availability of certain products,” said Paul Candon, chief executive of United Hardware. “Suppressed production output amongst some suppliers combined with shortages of core component materials in every day products, from tools to electronics, has begun […]to impact supply chains into the foreseeable.”

Mr Graham said he would encourage Irish shoppers to do their Christmas shopping early this year to guarantee access to certain brands but also to help “spread the load” with social distancing.

There are fears over how to control the throngs of shoppers on popular streets and in shopping centres that are traditionally a feature of the December season. He said some retailers would lengthen shopping hours to facilitate trade and ease congestion.

“We need to encourage shoppers into shops early this Christmas. We need to spread it out. It’s one thing for people to queue outside in July. It’s a different thing to do it on a wet December day.”