Fintan O'Toole: Demand for Britishness is high but the supply is drying up

When even The Spectator is playing Give Ireland Back to the Irish, how can people in Northern Ireland hold on to a British identity?

November 16th, 2018: The prospect of a Brexit deal has been greeted with fear and scepticism in Northern Irish unionist heartlands. Video: Reuters 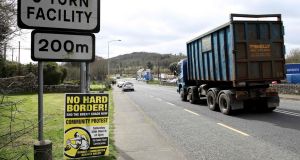 A lorry driving near Dundalk: The question for all of us on this island is, what else can make those who see themselves as British feel at home in Ireland? Photograph: Paul Faith/AFP/Getty Images

The health of Britishness is a vital Irish national interest. In surveys, a little under half of people in Northern Ireland say they feel strongly British. And though you might not know it from some of the crudely nationalist rhetoric that has bubbled back up to the surface, the people of the Republic overwhelmingly recognise their right to this identity.

In 1998, 94 per cent of us voted to drop the territorial claim to the North and replace it with an aspiration to unite in harmony and friendship all the people who share the island in all the diversity of their identities and traditions. The number of people who actually voted against this radical revision – 85,748 – would almost fit into Croke Park.

Let’s be clear what this means. It means not just that Britishness is a part of Ireland’s present but that it belongs in Ireland’s future. We collectively dropped the old nationalist myth that the Britishness of a large minority on the island is “false consciousness”, a mirage that will evaporate when Ireland is united. A diversity of identities is not a woeful legacy of imperial manipulation. It is part of an open-ended condition of plurality. This is what we signed up for in 1998: a capacious and complex sense of belonging that includes a right to Britishness.

And this is where we are in terrible trouble. The lovely phrase in the Belfast Agreement proclaims the birthright of everyone in Northern Ireland to be “Irish or British or both as they may so choose”. Implicit in it is the idea that Britishness is a choice that will always be available to those who want it.

Twenty years ago, who was imagined as denying that free choice? The IRA. The unspoken but resonant rebuke was to a violent and bullying form of Irish nationalism that had denied the legitimacy of a British identity on the island. What nobody imagined was that the choice would be threatened from the other political and geographical direction. Yet this is what has come to pass: in the deep crisis of the British state, the right to be British is looking ever more tenuous.

To grasp a small straw in the wind, listen to The Spectator’s Coffee House Shots podcast, presented by its editor Fraser Nelson. It is a very good sounding of Tory and pro-Brexit sentiment. Last week, it discussed the way the DUP’s insistence on aligning the rest of the UK with Northern Ireland essentially ties the British into a soft Brexit. And what record did The Spectator play at the end? Paul McCartney’s naïve Brits-out agitpop song from 1972, Give Ireland Back to the Irish. Banned from the UK airwaves in 1972, it is now in Tory circles an acceptably provocative way of hinting that perhaps all the “Irish” (including the DUP) should bugger off and leave us to our own grand project of national liberation.

This is just one tiny moment but it is telling because it arises from a much deeper shift in English sentiment. The evidence for it is stark and dramatic: Leave voters in England care much more about Brexit than they do about Britishness. A few findings from the big, rolling Future of England survey speak for themselves. Huge majorities of English Leave voters would support Scottish independence (88 per cent) and the collapse of the Irish peace process (83 per cent) as prices worth paying for Brexit.

A mere 25 per cent of English Leave voters agree with the proposition: “Revenue raised from taxpayers in England should also be distributed to Northern Ireland to help Northern Irish public services”. The same goes for Scotland. And, astonishingly, 51 per cent of Leave voters in England even agree that “Scottish MPs should be prevented from becoming ministers in the UK government”.

You can’t choose a product that is not on offer. Britishness, like every other national identity, is manufactured – but what if they stop making it? Something very profound is happening to the political economy of Britishness: the demand in Northern Ireland is still pretty high but the supply is in real danger of drying up. The message is: Britishness is out of stock but have you tried Brexitness, which provides all the same thrills of tribal belonging? The DUP has bought the substitute product. But it does not do the same job at all. It is not an identity, just an identity crisis.

There is no joy in any of this for Irish nationalism. The simplistic notion that a quick transition to Irish unity will solve the problem is utterly unconstitutional. The Constitution requires a profound reconciliation between diverse identities. That in turn requires people to be secure and confident in their sense of belonging.

The crisis of the British state so evident in the collapse of the political order at Westminster has destroyed the security and confidence of Britishness. They will not return any time soon. The question for all of us on this island is: what else can make those who see themselves as British feel at home in Ireland? If we are to share this space decently, it is in all our interests to approach that question tenderly, openly and generously.