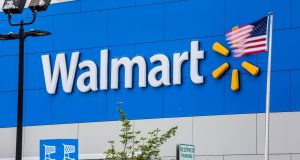 Walmart Inc, the world’s biggest retailer, on Thursday posted a 33 per cent rise in US e-commerce sales, rebounding from the 23 percent growth witnessed in the previous quarter, sending its shares up in premarket trade.

Walmart said it is on track to increase US e-commerce sales by 40 percent for the full year.

The rebound in e-commerce sales comes after a sharp slowdown during the crucial holiday quarter, which sent its shares down over 10 per cent and wiped out $31 billion from its market capitalisation. The numbers spooked investors who worried the retailer would not be able to keep pace with rival Amazon. com. Excluding special items that included an unrealized loss on the company’s equity investment in Chinese ecommerce firm JD.com and a gain related to the US tax reform plan, adjusted earnings came to $1.14 per share in the first quarter ended April 30th.

Sales at US stores open at least a year rose 2.1 per cent, excluding fuel price fluctuations, in line with analyst forecasts, according to Consensus Metrix. Walmart has recorded nearly four straight years of US growth, unmatched by any other retailer.

Walmart’s shares were up 1.8 per cent at $87.68 in premarket trade. The company’s stock has fallen around 20 per cent since reaching an all-time high of $109.98 in late January.

Meanwhile in the UK, Asda has seen sales rise for the fourth consecutive quarter, but the supermarket took a hit on profits as it continues to bring down prices in an effort to stay competitive. The Walmart-owned supermarket, which is readying itself for a mega-merger with rival Sainsbury’s, booked a 3.4 per cent increase in like-for-like sales in the three months to March 31st.

Taking out the benefit of an early Easter, sales grew 1 per cent on a like-for-like basis, but the figures represent a year of positive sales growth. Asda’s gross profit fell year-on-year, which the company attributed to its investment in price reductions and an early Easter forcing the firm to change its sales mix.

Asda boss Roger Burnley said: “During the first three months of the year, we have continued to invest sensibly where it matters most to our customers with lower prices, innovation in our own brand and further improving their shopping experience whether in store or online. “Whilst we are not complacent, we are positive about our growing momentum and excited by the opportunity that our proposed merger with Sainsbury’s offers to accelerate our successful strategy and go further, faster.” Online grocery sales were up 8.3 per cent in the quarter, with sales from George. com jumping by 21.9 per cent. Asda has been leading a turnaround in an attempt to improve sales amid a long-running supermarket price war. - Reuters

1 In this strangest of recessions, what happens next for Ireland?
2 Chris Johns: Boohoo exposed on pay and conditions in digital economy
3 ‘Working remotely requires more individual contact, not less’
4 Hotel bookings collapse in wake of additional Covid restrictions
5 FBD changes wording of business insurance policies amid fight over virus payouts
6 Should I switch bank now with Ulster Bank at risk of closing?
7 Michael O’Leary is the boss you want to lead an airline out of crisis
8 Four-day week is a campaign worth watching
9 Fortnite owner signs multimillion deal to buy Irish ‘kidtech’ firm
10 Help, I’ve no PRSI stamps – can I still get a pension?
Real news has value SUBSCRIBE