Arnotts eyes the future as it revels in its past 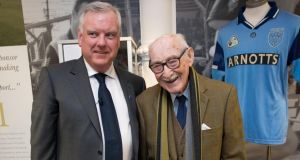 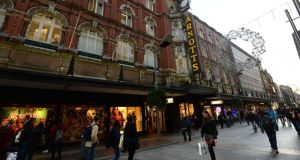 Much of the work done so far on upgrading Arnotts on Henry Street in Dublin has involved legacy issues such as refurbishing old departments. Photograph: Dara Mac Dónaill

If Dublin department store Arnotts could talk, its accent would probably sound a little bit like that of 94-year old Clontarf resident Gerard Nolan.

Genteel and proper, but emitting those unmistakable tones of a denizen of our capital city, Nolan chatted away happily at the launch this week of Arnotts’ new in-store museum, which kicked off its six-week long birthday celebrations.

RTÉ broadcaster Joe Duffy, compere of Tuesday’s launch and a committed history buff, was rapt with the gentleman’s story. In 1942, Nolan started work as a postboy at the retailing institution, then owned by the Nesbitt family.

The following year, all the staff received an extra week’s wages to celebrate Arnotts’ centenary (it is 175 this month). Nolan explained to Duffy that he was later promoted to retail superintendent, akin to a floor manager, at the age of 25.

“I used to have to climb ladders up to the tanks to fill them with water,” he said.

“Tell, us Gerard, can you remember any questions from the exam you sat to get the job,” said Duffy rather ambitiously – the exam was 76 years ago.

“I can remember one,” beamed Nolan, rattling off a brain-teasing riddle about how you might fill tins of water while marooned on a desert island.

Duffy explained that he often brings his mother (Mabel, who celebrates her 89th birthday today) into the store: “And she still won’t walk on the escalators.”

The new in-store museum is curated by historian Robert O’Byrne and the Little Museum of Dublin. Its exhibits contain artefacts and displays going back to the store’s foundation. For every chapter of the city’s past, it seems there is a page for Arnotts – the great fires, 1916, the “Emergency” during the second World War.

When the Selfridges group, owned by the Weston family, which also owns Brown Thomas, bought Arnotts from property developers in 2015, it got a trading business with sales in excess of €70 million, 250,000sq ft of retailing space, and the box seat in the city’s retailing heartland. Arnotts’ history they got for free.

To secure the store’s future, however, the Westons must invest.

Over the past two years, the family has made €15 million available to Arnotts for technology and store upgrades, the latest €11 million tranche released earlier this year.

Paul Kelly, the Irish-born managing director of the London-headquartered Selfridges group, explained that much of the work done so far has involved “legacy issues” such as new floors and refurbishing old departments.

The family is investing to “cherish the store’s unique heritage”, says Kelly. But the old must be complemented by the new.

Adjacent to the museum in the top-floor furniture section, Arnotts has opened a pop-up tearooms. Over cucumber sandwiches and cakes your doctor mightn’t recommend, the store’s managing director, Donald McDonald, explained what’s on the menu for Arnotts.

One thing he won’t be serving up, he confirmed, is any bid to ape the appeal of Brown Thomas, across on the south side of the river Liffey.

“I’d really like to dispel that myth, which may have cropped up because the stores have common owners,” said McDonald.

About €3 million has been set aside for investment in the ground-floor beauty hall, the point of entry for the store on bustling Henry Street. This comes on top of about €1.5 million invested last year in the department, which included the addition of Coach, MAC and Longchamp sections.

Arnotts will upgrade its two largest restaurants (there are five eateries in total), emphasising more table service, with the whole network serviced by a new €1.2 million central kitchen. Even the staff canteen is due a revamp.

Chefs will also be encouraged to work out in full view of the store’s diners. This will add an element of “theatre”, according to McDonald.

Refurbishments will continue – a new toy department recently opened, while legacy works on floors and fittings will also continue, as well as a new air-conditioning system. A new hair salon has opened, and the furniture department has also been improved.

Much of the investment, however, has been set aside for technology. Arnotts has embraced the culture of “omnichannel retailing” – the melding of the offline with the online retail experience – that is sweeping the sector.

Retail sales were up 2.8 per cent across the Irish economy in March. Arnotts’ sales have already risen to above €75 million from the €70 million level when the Westons bought the store.

Yet bricks-and-mortar retailers are feeling the pressure from a customer swing to online shopping, most notably with fewer people physically entering stores.

“There have been challenges for footfall. But our [financial] figures are up,” said McDonald.

“We view ourselves as one business – omnichannel – comprising a website and a store. We look at visits to our entire business. When you do that, visitor numbers are way up.”

The omnichannel approach involves investing simultaneously in the store and website experience in the hope of executing a sale either online or in the store, whichever the customer prefers. Apps linking the two arenas are critical.

“We see omnichannel as a way of getting closer to customers,” said Kelly. “[It is a] deeper, targeted and more personalised engagement strategy.”

Online sales, Arnotts says, are growing at 30 per cent year on year.

Other planned IT spending, pencilled in as part of the latest €11 million investment, will focus on upgrading Arnotts’ warehousing, stock control and human resource functions. The 1,200 staff will also receive a smartphone app to allow them swap shifts with each other.

“A lot of the investment won’t be tangible to customers,” said McDonald.

With the growth in online sales, the overall IT investment is meant to capitalise on an obvious opportunity.

But isn’t it running against the grain slightly for Arnotts to simultaneously invest heavily in the store’s physical infrastructure when footfall numbers are being challenged?

“Not at all. We have to have the right look and feel. We’ve learned a lot from the Selfridges group, and we’ve taken some of our lead from them. But the ideas for much of the investment in our customer experience also comes from within Arnotts itself. We’re committed to the store’s identity.”

Once legacy works are completed, the investment won’t have to continue indefinitely at its existing rate, says McDonald.

Kelly, the long-serving Selfridges executive, is perhaps the best-known Irish retailer on the international stage. Characteristically, he is more ebullient: “The work being carried out will future-proof the store for another 175 years.”

Arnotts and McDonald are already planning ahead for the next event, after the birthday celebrations die down. August is set aside for a celebration of Irish goods with the Crafts Council of Ireland.

In the meantime, the official birthday date is set for next Thursday, May 17th. The 17th day of the fifth month or 17/5.

It seems suspiciously neat timing. Then again, in retailing, a little bit of flexibility is rarely a bad thing.