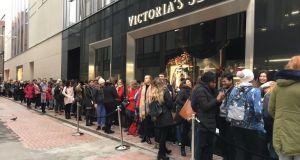 Margaret McDonald, who was one of the US brand’s most senior executives until she left last September, told a Dublin retail conference on Tuesday she “takes no responsibility” for the store.

The Kildare woman, previously chief executive of LK Bennett and Coast, suggested Grafton Street, which has the highest rents in Ireland, isn’t busy enough and is “too spotty” for the brand. She was speaking at the annual “retreat” of industry group Retail Excellence Ireland at Citywest in Dublin, attended by 2,000 delegates.

In response to a question from the floor, Ms McDonald said she was “surprised” when told of the plan to launch the huge Grafton Street outlet. It opened to much fanfare just before Christmas, with queues of up to 500 women outside.

“I was head of lingerie in the US, and that decision was taken by the international team. They came to me after they had already decided,” she said. “They got a really good deal on the lease. But I would not have signed that lease if it was up to me.

“Dublin is only just about above the threshold to be a big enough city for a Victoria’s Secret. You need as lot of traffic [footfall] to support a store like that. Grafton Street is spotty at best,” she said.

Victoria’s Secret, which has global sales of more than $7 billion, already had a shop airside at Dublin Airport’s Terminal 2. The Grafton Street outlet, however, was its first in the city centre, and was considered a major coup for the street. The lavishly-refitted former BT2 shop is let for close to €2 million per annum.

Grafton Street rents have risen steadily in recent years as consumer confidence has returned. About 60 million pedestrians walk down the street annually, putting it just outside the top 10 of European shopping streets for footfall.

However, a recent study by BNP Paribas Real Estate did not rank it among the top 20 European luxury high streets. London had four streets in the ranking, while Paris, Copenhagen and Rome each had two.

Retail groups, including REI, have warned that some Irish bricks-and-mortar retailers face a challenge to adapt as rents remain high, but some consumers migrate online for shopping.

Victoria’s Secret said later: “While we will not comment on the opinions of former employees, we can report that we are very pleased with our store in Dublin. Customer response has been excellent.”

1 Are there annual limits on inheritances or gifts to a child?
2 Ireland has EU’s most progressive tax system, study finds
3 Who are Ireland’s 17 billionaires?
4 My father in a nursing home wants to gift me his house
5 Fallon & Byrne gets permission for extension in Exchequer Street
6 Takeda overhauls Shire’s Irish structure to ease dividend payments
7 Dublin office vacancy rate hits lowest level in 20 years
8 Aunt has bequeathed a house intended for my son to me
9 Irish workers now ranked as most productive in world
10 European investor acquires Harcourt Road offices for €55m
Real news has value SUBSCRIBE