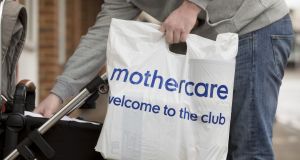 Mothercare’s sales and profit have been hammered by intense competition from supermarket groups and online retailers. Photograph: Bloomberg

Britain’s Mothercare, the struggling mother and baby products retailer, said on Thursday it would close 50 more stores as part of a survival plan that would also see it ask shareholders for £28 million (€32.1 million) in an equity raise.

Mothercare’s Irish division is a separately owned business and its managing director, Jonathan Ward, said: “As a result our 15 Irish stores are unaffected by any plans in the proposal and will continue to trade as normal.”

Mothercare’s sales and profit in the UK have been hammered by intense competition from supermarket groups and online retailers as well as by rising costs. Its shares have lost 83 per cent of their value over the last year.

The firm said it would seek creditor approval for company voluntary arrangement (CVA) proposals that would enable it to shut 50 stores and secure rent reductions on 21 others.

Mothercare currently trades from 137 UK stores, having had nearly 400 a decade ago. The new plan would see it trade from 73 UK stores by 2022.

In addition to the proposed equity issue the firm has also secured revised committed debt facilities of £67.5 million, £8 million of new shareholder loans and a new debtor backed facility of up to £10 million from a trade partner.

Mothercare shares closed on Wednesday at 21.3 pence, valuing the business at just £36.5 million.

Mothercare’s Irish business is a family business, started by David Ward in 1992 and now run by his children. The company has 15 stores in the Republic and is the fifth largest partner to Mothercare International. – Reuters

1 Fair Deal nursing homecare leaves little for bills and gifts
2 Portugal set to curb tax breaks for wealthy foreigners
3 Tax and spend: What have FG done for your pocket?
4 Pensions row fix could threaten future of State payment, actuaries warn
5 Pound dips as Bank of England decision looms
6 US budget deficit forecast to blow out by mid-century
7 Court asked to impose maximum disqualification on director
8 Accumulated profits at Kathryn Thomas’s media company rise to €420,000
9 Will the next decade be a better one for value investors?
10 SAP hit by fall in cloud computing orders
Real news has value SUBSCRIBE