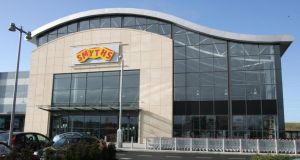 The “initial purchase price” to be paid by Smyths for the central European assets of Toys R Us is €64.4 million, plus performance-related and escrow payments that could add another €15 million.

The bid by family-owned Irish retailer Smyths Toys to buy the central European assets of Toys R Us will be considered by a US bankruptcy judge on Tuesday.

Hundreds of pages of material have been filed in recent days giving an insight into the proposed €79 million deal, which would add 93 stores in Germany, Austrian and Switzerland to Smyths existing 110-store UK and Irish network. The papers disclose that the Smyths deal has been dubbed “Project Elf” by advisers.

Galway-headquartered Smyths, which is controlled by four Mayo brothers, appears to have set up a new company to consummate the deal – Smyths Toys EU HQ, which was established last November as “Hopebrook”.

The US parent of Toys R Us is being liquidated with $5 billion of debts. Documents filed in the US bankruptcy court show Lazard contacted about 90 potential investors in its European division in late January.

Of these, 25 expressed an interest, before serious bidders for some or all of the European assets were whittled down to five, including Smyths, by April.

Smyths submitted the only binding offer for the German, Austrian and Swiss stores, sealing the deal on April 21st.

As well as the 93 stores and four websites, the documents reveal that Smyths is buying a near 17 per cent stake in NTG (Network Toys Germany), a technology joint venture that provides data services to German toy retailers.

The “initial purchase price” to be paid by Smyths is €64.4 million, plus performance-related and escrow payments that could add another €15 million.

The deal is due to close at the end of May. Included in escrow payments are €2.5 million as collateral in case disputes arise during the deal. A further €6.44 million is due in 12 monthly instalments, with the balance paid after 18 months.

Some €11.3 million is to be lodged by Smyths, pending a tax cert from Swiss authorities, with about €10.4 million due for a so-called “transitional services agreement” (TSA) with the US parent, which will cover the handover of the business until 2019.

The buyout deal contains a pledge that, if the US bankruptcy judge orders a further competitive process to sell the assets, the Smyths offer will serve as a “stalking horse” arrangement. The deal’s “longstop date” is listed as May 31st, which means the contract may be terminated if the transaction does not close by then.

An Isle of Man company owned by the Smyth family has given a “letter of commitment” guaranteeing up to €74.4 million as part of the transaction. This entity will pay a penalty of €7.4 million if it fails to follow through on its promises.

Under the TSA deal with Toys R Us’s US parent, for which court approval is being sought, $235,000 becomes due for payment this Tuesday, with further monthly payments of $470,000 each. The TSA deal outlines rules for the handover of the business until the end of April 2019.

The documents show that 69 per cent of the purchase price relates to the German stores, 9 per cent to Austria and 22 per cent to Switzerland.

The German unit is listed as a guarantor for certain loan notes that were issued by the Toys R US group, and the US court is being asked by the bankruptcy trustees for it to be released from these commitments.

Some bondholders had sought depositions from deal advisers last week, but this request has since been withdrawn.

Trustees have submitted some court documents for the Smyths deal “under seal”, which means they cannot be accessed publicly.

1 NI house builder apologises to Harry and Meghan over adverts
2 Little strategic thinking in election manifestos of Fine Gael and Fianna Fáil
3 Opioid executive admits to ‘no morals’ ahead of prison term
4 Volvo warns of scaled back car line-up if UK splits from EU rules
5 CPL founders Anne Heraty and Paul Carroll in line for €1m dividend payout
6 US threatens retaliation against EU over proposed carbon tax
7 Are there annual limits on inheritances or gifts to a child?
8 My father in a nursing home wants to gift me his house
9 South Dublin Credit Union members urged to borrow more to ensure survival
10 Who are Ireland’s 17 billionaires?
Real news has value SUBSCRIBE