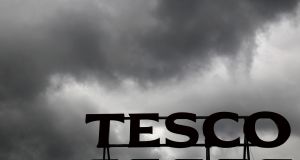 Tesco agreed to a finding of market abuse in relation to a trading update published on August 29th, 2014, which overstated expected first-half profits by £250m

Retailer Tesco has agreed to pay £214 million (€247m) in fines and compensation for investors to settle an investigation over a 2014 accounting fraud that sparked the biggest crisis in its near 100-year history.

The £85 million (€98m) in compensation earmarked for investors is the first time that Britain’s Financial Conduct Authority (FCA) has enforced such a payout for market abuse.

“What happened is a huge source of regret to all of us at Tesco, but we are a different business now,” chief executive Dave Lewis, who had to deal with the scandal after taking charge in September 2014, told reporters on Tuesday.

Tesco, which has been rebuilding since the crisis and a price war that hammered the supermarket sector as a whole, said it would take a one-off charge of £235 million in its 2016-17 results, due on April 12th.

Shares fell in early trading, also influenced by news on Monday that two big shareholders oppose its proposed £3.7 billion takeover of wholesaler Booker. However, they rallied later in the session.

“The overall exceptional charge of £235 million is worth 2.9 pence to the share price,” said Bernstein analyst Bruno Monteyne, who rates Tesco “outperform”.

The deferred prosecution agreement between the SFO and Tesco’s UK subsidiary, Tesco Stores Limited, enables the firm to avoid a criminal conviction provided it meets certain conditions and pays the fine. The agreement relates to false accounting by Tesco’s UK business between February 2014 and September 2014.

The profit overstatement, identified three weeks after Mr Lewis took over as chief executive, was later raised to £263 million.

Mr Lewis has since worked to simplify Tesco’s business, and has transformed its relationship with suppliers to ensure there is no repeat of the scandal.

The agreement with Tesco is the second struck by the SFO in three months. In January aero engines maker Rolls-Royce agreed to pay £497 million to settle a lengthy bribery investigation.

Tesco’s compensation scheme for investors will cover those who bought shares or bonds for cash between August 29th, 2014, and September 19th, 2014, giving 24.5 pence per share plus varying rates of interest depending on whether the investor was institutional or retail.

Mr Lewis told reporters Tesco would contest outstanding civil claims relating to the scandal. The company is facing a claim of more than £100 million from a group of 125 institutional investors filed last October. A source familiar with the lawsuit said claimants were closely examining Tesco’s compensation scheme.

The retailer is also facing a claim filed by Manning & Napier, a US fund manager.

“The short period of time covered by both the SFO ruling and the FCA ruling seems to imply very limited opportunity for these cases to extract large compensation,” said Bernstein’s Mr Monteyne. – (Reuters)

1 Should my mam wait for house prices to drop before buying?
2 Cheers: Conor McGregor's whiskey races up the sales chart
3 Two prominent business leaders in planning row with neighbour
4 ‘I’m so lucky to be in the Caribbean – a million miles from Derry Girls’
5 Joint accounts: if one of us dies, can the other access the money?
6 ‘The recovery needs to be a full-scale economic renewal’
7 Battle for control of America’s mammoth utility industry set to intensify
8 US ‘hard seltzer’ drink White Claw launches in Ireland
9 Military-style planning can help businesses battle Covid-19 survival threat
10 Citigroup warns that markets are out of step with reality
Real news has value SUBSCRIBE