When poor car sales taken out of CSO figures it switches to a 5.9% increase year-on-year 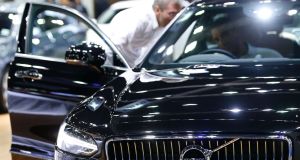 A Volvo at the Bangkok International Motor Show: retail sales fell by 0.5 per cent in February on the back of a near 6 per cent slide in car sales. Photograph: PA/Narong Sangnak/EPA

The annual rate of growth in retail sales has slowed to 1.1 per cent, its lowest level in four years.

The latest numbers from the Central Statistics Office (CSO) indicate sales fell by 0.5 per cent in February on the back of a near 6 per cent slide in car sales.

However, when the motor trade is excluded there was a monthly increase of 1.1 per cent in February and a 5.9 per cent increase year-on-year.

The value of non-motor sales also rose by 3.3 per cent on an annual basis.

The sectors with the largest monthly volume increases were clothing, footwear and textiles (4.9 per cent), non-specialised stores (4.5 per cent) and hardware, paints and glass (4.3 per cent).

Conversely, the sectors with the largest month-on-month volume decreases were motor trades (-5.8 per cent), fuel (-3.5 per cent) and pharmaceuticals, medical and cosmetic articles (-2.8 per cent).

Lorraine Higgins of Retail Excellence broadly welcomed the figures but cautioned against “being too optimistic”.

She said the group had been contacted by members in recent days who are experiencing very negative trading conditions.

“Some retailers are reporting like-for-like declines of upwards of 30 per cent against March 2016,” she said.

“It is clear that consumer sentiment has been negatively impacted due to concerns about the impact of Brexit,” she said, noting the primary income in over 100,000 homes comes from a company which is dependant of exports to the UK market, namely agri, food and drink.

She also claimed traditional sales were being eroded by a further acceleration in online shopping activity, most of which stems from outside Ireland.

“If this business was being done with Irish-based retailers it would generate up to €1.7 billion more VAT for the exchequer, boosting annual VAT receipts by more than 13 per cent,” she said.

“The data suggest that Irish households continued to increase spending at a robust pace in Q1 and that consumer spending will continue to be a key driver of gross domestic product [GDP] growth this year,” he said.