Caveat: Media-shy developer Deirdre Foley was hurled into spotlight but what did she expect? 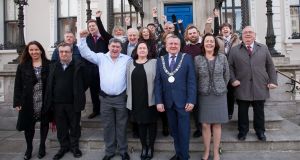 Perhaps it was the glare of the publicity, or maybe it was having to line up with a fist-pumping cadre of trade unionists for a family photo outside the Mansion House. But media-shy developer Deirdre Foley seemed nervous at Tuesday’s announcement of an agreement with Clerys workers that will end their protest over the store’s brutal closure in 2015.

When she took to the lectern to address the Siptu gathering in the Oak Room, Foley’s voice caught in her throat a couple of times. She smiled thinly as she delivered a few safe platitudes about partnership. But she looked ill at ease with it all; as if she’d rather be anywhere else but in front of the cameras.

“I’m not a huge fan of standing up here doing this,” she said, to the surprise of absolutely nobody at all.

Before the Clerys buyout and closure, Foley had a reputation as an “alpha female” of the Irish property scene – a gritty dealmaker who took few prisoners, but who was allergic to the limelight. While she was well known in business and journalism circles, she was virtually unheard of among the public at large. The Clerys buyout and closure changed all of that for the Sligo woman.

In the 21 months before the department store closed on June 12th, 2015, she warranted a little more than 20 mentions in Irish newspapers. Almost half of those came in the weeks immediately before the buyout as speculation mounted that she was leading a bid.

In the 21 months since Clerys closed, Foley’s name has cropped up in Irish newspapers more than 220 times. Public relations professionals often measure media mentions in terms of them being positive or negative for those concerned. Her tally since 2015 is a tenfold explosion of the latter; a blazing pyre of public ire.

From a publicity point of view, the handling of the Clerys closure was about as cack-handed as one could dare dream up. What, exactly, did Foley expect the reaction to be following a deal signed in the dead of night that resulted in staff being locked out on the street outside the State’s most famous department store in full view of RTÉ cameras?

Business closures had become the norm in the previous seven years. Perhaps Foley expected apathy, or maybe a swift storm in a teacup followed by blithe resignation. But these days some things just go viral and nobody can really explain why. They just do, and you have to live with it.

People were becoming fed up with the perception that staff and suppliers always seemed to be shafted in takeovers of struggling businesses, while corporate dealmakers ploughed on regardless. All of this got projected onto the Clerys deal, the one they couldn’t flush away. Morally, it stank.

As a brand, Clerys had always evoked a sense of heritage and genteel charm, even if in latter years it often failed to live up to this. But after the closure, it became a byword for cynical and rapacious corporate planning.

Foley clearly grew to understand some of this, and she tried to stem the tide. In recent months, she even turned to a friend, the Web Summit co-founder Daire Hickey, for background advice on how to improve her image.

Will this week’s peace deal with Siptu’s “Justice for Clerys Workers” campaign salvage any positive glow for the Clerys name? Perhaps, in time.

In recent weeks, Dublin Lord Mayor Brendan Carr helped broker an agreement between Foley’s Natrium and the workers that this week resulted in Siptu withdrawing its appeal against planning permission for redevelopment of the site.

The precise terms of the deal remain confidential. Why? Who knows, although the secrecy would appear to better serve Natrium’s interests than the workers’.

The deal includes an unspecified “goodwill payment” for the 130 direct employees who got only statutory redundancy, some after 30 or 40 years service. Good for them. And if confidentiality was the price of it, who can blame them? They’ve paid enough already.

The deal also includes a vague commitment to give former Clerys workers, through a liaison officer, some sort of preferential consideration for jobs in the redeveloped scheme. How assiduously that can be implemented, given that most of the employers in the finished development will be tenants of Natrium, and not Natrium itself, is anybody’s guess.

There are also promises to contribute to the inner-city community and provide decent working conditions when the scheme is finished. But shouldn’t that be the minimum for any half clued-in developer when tackling a sensitive site?

Here’s what the Clerys peace deal doesn’t deliver. It doesn’t repay taxpayers the €2.5 million the exchequer had to fork out for the statutory redundancy payments for Clerys workers, while others involved in the deal stand to make a fortune.

It doesn’t reimburse the unsecured creditors who lost out in the operating company’s liquidation, while Natrium held onto the property. It doesn’t compensate the concessionaires who were turfed out alongside staff. And it doesn’t wash away the pall of public disapproval that remains for an ill thought out closure, which proved that even the cleverest of business people can make the most appalling errors of judgment.

Metro Property Group (MPG), a US-based business that was once a partner of the Irish fund Brendan Investments in the Detroit property market, is being investigated by the Federal Bureau of Investigation (FBI) over its client deals.

There is no suggestion that Brendan Investments, or anyone connected with the Irish company, is suspected of any wrongdoing or that its actions or deals form any part of the FBI investigation.

However, the fact that its former partner is under federal investigation in relation to (as yet unproved) allegations concerning Detroit property deals, should be of interest to the Irish fund. It is well known that Brendan Investments lost heavily on its dealings with MPG.

Brendan Investments is run by Tunisia-based Corkman Vincent Regan, and was co-founded by Eddie Hobbs (above), who is no longer involved.

Several former clients of MPG have been contacted as part of the FBI investigation, which apparently has been ongoing for quite some time.

Shareholders in Brendan Investments, which is facing a wipeout of its €13 million equity, should keep an eye on proceedings.

Irish casinos are a lucrative game. Not for punters, but rather for some of the operators in this unregulated industry.

This week, a High Court judge said that Irish casinos are not legally obliged to pay out on bets. He made the comment in an unsuccessful case taken by a punter against Automatic Amusements, which trades as D1 casino. The punter complained that €11,000 had not been paid over, but lost his case.

Accounts for 2016 for Automatic Amusements show the tiny casino business was sitting on a cash pile of of €900,000 at the end of last January. It also had retained profits of €1.3 million.

In the long run, the house always wins.