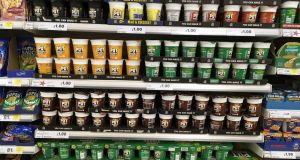 The results could boost investor enthusiasm for the maker of Dove soap and Knorr soups, whose shares have gained since February when it swiftly rejected a $143 billion takeover offer from rival Kraft Heinz, which prompted it to undertake a wide-ranging review of its business.

It announced the review’s results earlier this month. Chief financial officer Graeme Pitkethly told Reuters that performance in the second half of the year should be better than in the first half, and expressed optimism about the global economy. “We are seeing positive signs in the economy overall,” Pitkethly said, talking about a “bottoming out” of currency devaluations in large emerging markets that are key for Unilever including India, Indonesia and Brazil.

Unilever said underlying sales rose 2.9 per cent in its financial first quarter. That compares to analysts’ estimates of 2 per cent, according to a consensus compiled by the company, and growth of 2.2 per cent in the fourth quarter and 3.2 per cent in the third quarter of the last financial year. The sales gain was due entirely to price increases, with the amount of goods sold falling 0.1 per cent. Excluding the struggling margarine and spreads business, which Unilever plans to sell by the end of the year, underlying sales rose 3.4 per cent.

Looking ahead, Unilever reiterated the forecast it gave earlier this month, saying it was on track for sales to grow 3-5 per cent this year, with margin improvement of at least 80 basis points and a dividend increase of 12 per cent.

Rival Nestle on Thursday reported a slowdown in quarterly sales, in line with analyst expectations.

1 ‘I’m so lucky to be in the Caribbean – a million miles from Derry Girls’
2 Joint accounts: if one of us dies, can the other access the money?
3 Tax and the Pandemic Unemployment Payment: Your questions answered
4 Ryanair expects air fares to fall when flights take off again
5 ‘The recovery needs to be a full-scale economic renewal’
6 Household savings soar as consumers stop spending
7 Irish businesses urged to take advantage of opportunities in Germany
8 Covid-19’s impact on the economy makes for grim reading
9 Pharma research company APC to open R&D unit at Cherrywood
10 Judge rules property fund to pay costs of dispute over warehouse access
Real news has value SUBSCRIBE