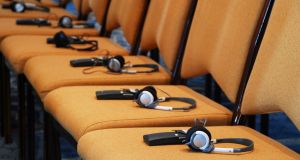 Clients of Translation.ie/Forbidden City Ltd include the Courts Service, An Garda Síochána, the Health Service Executive and Microsoft. Photograph: iStock

The two directors of the company that runs Translation.ie, the Dublin business that supplies services to public and private sector clients, shared a pension contribution of €1.15 million last year, according to accounts just filed.

Forbidden City Ltd directors Crystal Li and Ronan Power, both of the same address in Dublin, also received€201,000 in other emoluments during the year.

The total directors’ remuneration of €1.35 million was significantly up on the previous year’s €561,8000.

The accounts do not give a breakdown of the remuneration between the two directors. Ms Li, who is the owner of Forbidden City and the managing director of Translation.ie, said she did not wish to comment.

The abridged accounts say the profit for the year was €675,180, slightly more than the figure for 2018. Accumulated losses at year’s end were €611,490. There is no figure given for turnover.

According to its website, the clients of the service include the Courts Service, An Garda Síochána, the Health Service Executive and Microsoft.

The website says those who would like to obtain work from the business as a translator or interpreter should have two years of translation or interpreting experience and a university degree.

The greatest demand for interpreting in Ireland, according to the website, is in community and social interpreting.

“The work is generally offered on an ad-hoc basis 24 hours per day, seven days per week, depending on your availability.”

Interpreters wanting to work for the business should be experienced in medical, legal, Garda, social work, immigration, industrial, social and liaison interpreting, according to the website.

During the year Forbidden City directly employed an average of 41 people, down from 49 the previous year.

Aggregate payroll costs were slightly more than €2 million, up from the €1.2 million of the previous year.

The business was founded in 2001 and, according to its website, has evolved into “a leading interpretation, translation and localisation service provider offering around the clock full language solution services to not just Ireland but also the global market”.

In 2016, Ms Li won the first-ever professional achievement award made by the Association of Chinese Professionals in Ireland.

At the time, the translation service she had founded had 50 employees and used the services of more than 2,000 linguists, in Ireland and abroad, according to the citation.