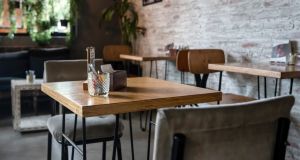 “Some commercial landlords seem to be oblivious to fact that Ireland is in an economic crisis.” Photograph: iStock

The Restaurants Association of Ireland has called on the Government to take urgent action to help restaurants deal with landlord disputes over the charging of full rent rates during the pandemic.

The industry group said a code of practice and fast-track arbitration was needed for a speedy resolution of such disputes to safeguard thousands of jobs in the hospitality sector.

The association has criticised “greedy landlords”, saying some were “not playing their part” and were continuing to charge their tenant businesses full rent rates during the current pandemic and economic crisis.

“Some commercial landlords seem to be oblivious to fact that Ireland is in an economic crisis,” said Adrian Cummins, chief executive of the Restaurants Association of Ireland.

“We are demanding urgent action from the Government. Businesses are struggling, and some cannot hold on much longer. These businesses are the mainstay of our communities, and people’s livelihoods. Why should they be driven out of business while commercial landlords continue to flourish and collect their full rents?”

The association said landlords needed to reduce their commercial rents in line with business turnover to support struggling restaurants and cafes.

A report on the industry by economist Jim Power recommended rents be included in a package of support measures for the industry. The recommended measures includes a 50 per cent commercial rent grant during periods when restaurant turnover is down 50-80 per cent.

“All we are asking is that landlords take into consideration the loss of turnover experienced by many businesses over the past few months and adjust the rents accordingly,” Mr Cummins said.