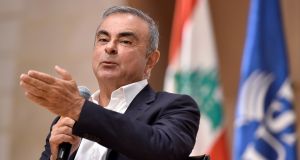 Carlos Ghosn during a press conference to launch his new university management and business programme in Beirut. Photograph: Wael Hamzeh/EPA

Former Nissan chairman Carlos Ghosn has made a public appearance in Lebanon during which he launched an initiative with a local university to help the country which is undergoing a severe economic and financial crisis.

It is only Mr Ghosn’s second appearance in public since he was smuggled from Japan in late December to his ancestral home, Lebanon.

In early January, he gave a news conference in Beirut saying he fled Japan because he could not expect a fair trial on financial misconduct charges, was subjected to unfair conditions in detention and was barred from meeting his wife under bail conditions.

Lebanon is mired in the country’s worst economic and financial crisis in its modern history. It defaulted on paying back its debt for the first time in March, and the local currency has collapsed, leading to hyperinflation and soaring poverty and unemployment. Talks with the International Monetary Fund on a bailout package have stalled.

The economic and political crisis deepened after an August 4th blast in Beirut that killed and wounded many and caused damage worth billions of dollars. – AP