Funds to resolve dispute will be raised from sale of stock 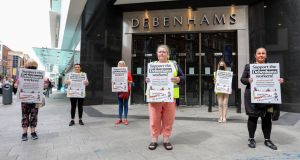 A potential deal aimed at resolving the long-running dispute involving staff at retailer Debenhams, which went into liquidation earlier this year, has been negotiated, the trade union Mandate has said.

However liquidators KPMG said on Friday that while significant progress had been made in discussions with the union, a settlement had not yet been agreed.

KPMG said a number of issues had still to be resolved.

The new proposal may involve the allocation of about €1 million, realised from the sale of stock, to finance a settlement fund which would provide additional payments to workers who lost their jobs following the liquidation of the retailer.

Some personnel may also be offered jobs in some of the former Debenhams stores, which will be taken over by a new retailer.

Mandate said on Friday that it had negotiated “a potential resolution to the Debenhams dispute as the workers near 150 days on strike following an announcement that the company would enter liquidation in April”.

The union said full details of the deal would be made available to the workers early next week ahead of a national information meeting. Debenhams workers would then vote on the proposals in a ballot.

“The protracted and complex nature of a very difficult set of negotiations has resulted in a potential settlement offer which is expected to include a financial settlement offer as well as guaranteed employment for a number of Debenhams staff as a new leaseholder takes control of at least three stores.

“Mandate trade union had negotiated a redundancy package for Debenhams staff in 2016 which included four weeks’ pay per year of service. However, when the company entered liquidation earlier this year, there were no assets to pay their 1,000 staff, leaving them with statutory redundancy of two weeks’ pay per year of service. Since then the workers have balloted for and engaged in industrial action.”

The Debenhams’ workers have been picketing the 11 stores operated by the retailer around the county over recent weeks, which has prevented stock being removed from the premises.

It is understood that under the new proposals being worked on these pickets would be lifted and stock would be available to be traded at some outlets.

In parallel, the liquidator would make an upfront payment of about €500,000, with a further €500,000 made available when the stock was sold.

The workers would also be entitled to a further 33.3 per cent of any net profit on the sale of stock, and individual workers will get first preference on purchasing the stock.

KPMG said on Friday: “The liquidators have been in discussions with the unions over the last few weeks. The liquidators are incurring significant costs in the Liquidation due to the inability to peacefully vacate stores and realise the stock which is due to pickets and protests. The liquidators’ view is that any settlement, should it be agreed, would be self-funding and in the interest of all creditors as the costs being incurred due to the current situation are eroding value and return to the creditors. The liquidators hope to trade two stores subject to landlord consent to self finance a large part of the settlement. “

“While significant progress has been made in discussions, there are a number of items that have yet to be resolved. The liquidators will continue to work with the unions and hope a settlement is possible.”

Mandate general secretary Gerry Light said: “This deal was only made possible because of the resilience and determination of our Debenhams members who have stood on picket lines through hail, rain and even storms over the last four months,”

1 How much state pension will I get next year?
2 Oxford Covid vaccine trials offer hope for elderly
3 Ulster Bank to introduce new card payment controls on app
4 Hurrah for the companies giving staff more time off
5 How long can Government afford to keep State pension age at 66?
6 Covid-19 will worsen shortage of accountants, says CPA Ireland
7 Sustainable investment: How your pension can help tackle climate change
8 The baroness with grande distribution in her blood
9 ‘Brexit readiness’ tool launched for Irish business amid trade talks impasse
10 Investors unnerved by Brexit, Covid-19 and US election jitters
Real news has value SUBSCRIBE