There should be a threshold of dignity for Debenhams workers 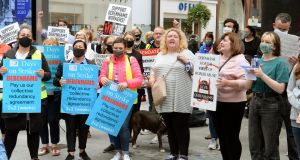 Last March it was abruptly announced by Debenhams Ireland that it would go into liquidation with the loss of more than 1,000 jobs.

The company initiated this process during the most intensive stage of the nationwide pandemic lockdown, when workers had no opportunity to vindicate their legitimate employment rights.

In our view this timing was not an accident.

The Covid-19 global pandemic has highlighted more than ever just who constitutes our “essential workers”. They are the frontline workers in the private and public sectors who have kept us safe and sought to keep our economy and society going. They include retail workers, many of whom are in precarious and low- paid work. It is no surprise that many of these jobs are carried out by women.

There can be no going back to the old ways after this pandemic. We cannot simply tolerate a situation where these workers are told to “like it or lump it”. There are other viable approaches to address disputes, and the Government must act now.

Throughout the Debenhams dispute the Irish Congress of Trade Unions (Ictu) has been working very closely with the workers’ trade union Mandate to develop a viable proposal for a satisfactory resolution.

Our proposal is derived from the Duffy/Cahill report, prepared at the request of the Department of Enterprise, Trade and Employment in 2016 in the wake of the Clerys debacle, which the Government has neglected to implement.

It recommended the introduction of a statutory scheme by which, in cases of insolvency, enhanced redundancy payments provided for by way of collective agreement could be recoverable as a preferential debt. This would ultimately be payable through a hypothecated levy fund administered by the State.

Having examined best practice in these matters operating in European countries such as Germany and Austria, who have established levy funds on private sector employers for such purposes (with contribution rates ranging from 0.66 per cent to 0.35 per cent of labour costs), we believe a similar model should be introduced in this country.

Any legislative enactment to implement this scheme must take account of the original liquidation date and subsequent redundancy of Debenhams workers.

It is only right and proper that industry takes its responsibilities seriously and demonstrates some social solidarity and make these necessary contributions to such a fund. We deserve to have a threshold of decency below which no worker should fall.

Ictu is of the view that this would be the most reasonable and fair approach to ensure the complete terms of workers’ collectively agreed contracts can be honoured in full so workers would never find themselves in similar circumstances in the future. Mandate have fully endorsed these proposals.

This approach also demonstrates the value of collective bargaining. Why should the Debenhams workers not have an expectation to achieve the terms that their union and employer negotiated?

Why must this legitimate aspiration be dashed by events to which they neither contributed nor had any control over?

The best efforts of Mandate to achieve a satisfactory outcome through engagement with the liquidator KPMG proved futile.

Ictu, together with Mandate, has led meetings on the issue with Tánaiste Leo Varadkar and the Minister of State for Employment Affairs and Retail Damien English. The subject was also extensively discussed at our recent meeting with Taoiseach Micheál Martin. They all concur that this dispute must be resolved.

It is abundantly clear now that such an honourable and just resolution will only be achieved through legislative change. All politicians in the Oireachtas, some of whom have been very vocal on the topic, can bring this about.

The pandemic has once again demonstrated the importance of the State as the backer of last resort. We now require the State to intervene and legislate to protect the Debenhams workers (indeed, all workers), to ensure the agreements they negotiate can and will be honoured.

By legislating for our proposals based on the Duffy/Cahill report, that can happen.