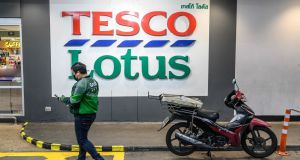 Tesco agreed to sell its Asian businesses to Thai billionaire Dhanin Chearavanont for more than $10 billion (€8.75 billion), clinching a record deal in Thailand even as the coronavirus outbreak damps enthusiasm for mergers and acquisitions worldwide.

Britain’s largest supermarket chain said it plans a £5 billion-pound (€5.7 billion) special dividend after the sale of the assets to Mr Chearavanont’s Charoen Pokphand Group. The UK grocer is gaining a cash infusion as it focuses on its home market, where it’s cutting thousands of jobs.

The company joins Carrefour of France and Metro of Germany in divesting Asian operations as the European retailers focus on their domestic markets. Metro agreed to sell its Chinese business for about €1.9 billion last year, while Carrefour also inked a deal to dispose its operations in China.

The sale marks the end of Tesco’s 22 year presence in Thailand, where it runs more than 2,000 hypermarkets and convenience stores under the Tesco Lotus brand.

Mr Chearavanont is buying back a chain that CP Group founded in 1994 and sold to Tesco during the Asian financial crisis four years later. In 2013, the investor reclaimed his control of another retail business, Siam Makro, the Bangkok-based operator of cash-and-carry shops, by paying $6.6 billion to buy out a stake from SHV Holdings.

For Tesco, the sale and payout to shareholders is a “good deal to our minds,” said Clive Black, an analyst at Shore Capital. The price is at the upper end of expectations though the company is losing exposure to a growth market, he said. The UK grocer also said the deal will eliminate its pension deficit.

Tesco announced a strategic review of the unit in December. People familiar with the situation had said the businesses could fetch more than $7 billion. In Malaysia, Tesco has more than 70 shops, according to its annual report. – Bloomberg