Tesco’s Irish sales up 1.3% annually after declines in second half 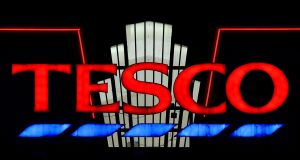 Tesco said it continued to make “good progress” in a competitive Irish market during the year, growing volumes across all food categories. Photograph: Toby Melville/Reuters

Tesco’s sales in the Republic grew 1.3 per cent to €2.68 billion last year. The like-for-like full-year performance, excluding VAT and fuel, came after a 0.4 per cent dip in the fourth quarter and a 0.2 per cent decline in the three months before that.

The retailer had 152 stores in the Republic at the end of the year to February 23rd, during which it opened two outlets and closed none. It expects to add another three stores in the coming 12-month period.

The company said it continued to make “good progress” in a competitive Irish market during the year, growing volumes across all food categories.

“Whilst the market remains highly competitive, we are confident we can build on this solid performance in the year ahead,” she said.

The overall group’s operating margin improved to 3.45 per cent in the past year.

“After four years we have met or are about to meet the vast majority of our turnaround goals,” he said on Wednesday. “I’m very confident that we will complete the journey in 2019/20.”

The supermarket group, currently celebrating its 100th year, is being rebuilt by Mr Lewis following a 2014 accounting scandal.

Analysts expected Tesco to report operating profit before exceptional items of £2.08 billion for the year, up from £1.64 billion in 2017-18.

Group sales rose 11.5 per cent to £56.9 billion, and the company recorded its 13th quarter of like-for-like sales growth in its biggest UK market, with a 1.7 per cent increase in the final quarter. – Reuters