Ashley’s antics made a bad situation worse for Debenhams 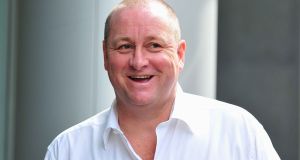 Mike Ashley: widely admired for his retail expertise but his reputation as a deal-maker has been dealt a serious blow. Photograph: Nick Ansell/PA Wire

It’s hard to believe, but there was a time when Mike Ashley was known as “Britain’s answer to Howard Hughes”.

Back in 2006 the reclusive sports goods retailer, already a billionaire, had never spoken to the press and only one very blurred photograph of him was known to be in existence.

It was a shot of a much younger Ashley playing squash, taken 25 years earlier when he still entertained ambitions to be a professional sportsman. An injury put paid to those hopes, however, and Sports Direct was born.

It’s a very different Ashley who waged and lost a fanatical and, at times, farcical battle for control of Debenhams, now in administration and under the control of its lenders.

Indeed, his at times outrageous pronouncements, often released out of hours and sometimes several times a day, have left Ashley looking more like Britain’s answer to Donald Trump.

Take, for example, his mystifying decision last weekend to undergo a lie-detector test in order to prove that his account of a meeting with Debenhams directors was correct, rather than their alternative version of events.

Not only did Ashley pass the test, his score “was so significantly high as to be considered rare in comparison to others”, Sports Direct said in a statement to a baffled City. That could have come straight from the White House.

Then there was his insistence that Debenhams’ directors should be hauled off to prison for rejecting his proposals, all of which were contingent on him being appointed chief executive of the 241-year-old department stores group. Unsurprisingly, that was a non-starter for the company’s lenders, on the hook for the retailer’s debts of more than £600 million (€694 million).

Ashley’s antics simply served to make a bad situation even worse for the Debenhams board as the department stores group careered towards its inevitable collapse.

The 26,000 people employed by the group in the UK and Ireland – many of whose jobs are now at risk – will also have looked on with bewilderment as the Sports Direct boss grew increasingly intemperate in his battle for control.

At its peak in 2006, around about the time Ashley was still keeping a low profile, Debenhams was a thriving business valued at £1.7 billion. Now the shares are worthless – Ashley’s near-30 per cent stake has been wiped out, as have the investments of other shareholders.

While Debenhams’ 165 UK stores will continue to trade as normal, it’s already clear that as many as 50 branches will ultimately be closed as the new owners attempt to put the business on a sustainable financial footing.

No timetable has been given for the closure of the stores, but it’s thought up to 20 branches could be shuttered this year.

Ashley is an unconventional company boss – who can forget the high court account of one Sports Direct management meeting, held in a pub, which ended with Ashley vomiting into a fireplace after consuming a dozen pints of beer followed by vodka chasers?

Or the game of spoof he proposed – and lost – to settle a dispute over a £200,000 legal bill connected to Sports Direct’s 2007 stock market float?

There’s room for colourful bosses in the City but such shenanigans are not so amusing when jobs are involved. Investors tend to turn a blind eye when a company is riding high, but are far less forgiving when times get tougher.

Ashley may not care what the City thinks, but he cares about Sports Direct, even though at one stage during the Debenhams battle he promised to step down at the sportswear group to run the chain of department stores instead.

That will have alarmed his shareholders, still smarting from the fall in the Sports Direct share price that saw the group ejected from the Ftse 100 index three years ago.

Ashley is widely admired for his retail expertise but his bruising experience with Debenhams has dealt a serious blow to his reputation as a deal-maker, not least because of the £150 million he’s now been forced to write off on his investment in the group.

The Sports Direct boss did not take defeat well on Tuesday, lashing out at the administration as “a national scandal”. But it does at least mean he can turn his attention back to his existing retail empire.

A period of stability at Sports Direct would now be advisable – and a period of silence from Ashley would be welcome too.