Debenhams to ‘trade as normal’ despite administration

Ailing retailer has more than 1,600 staff in Republic 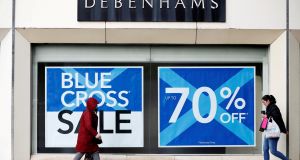 Debenhams, which operates 11 stores in the Republic, says its trading divisions, staff, suppliers and customers are unaffected for now after its lenders took control of the UK parent group this morning and placed it into administration.

Debenhams Plc was placed under the control of administrators – similar to examiners – from UK firm FTI on Tuesday, after the troubled retail chain rejected a financing offer from 30 per cent shareholder, Mike Ashley.

“The underlying group operating companies are unaffected and all businesses are continuing to trade as normal,” the group said.

The group, aside from the Plc entity that is in administration, was immediately sold by the administrators to a special purpose vehicle set up by the group’s lenders, who are owed £640 million (€741 million).

It is expected that the administrators running the business on behalf of the banks will seek rent reductions from UK landlords.

The Irish arm, Debenhams Retail (Ireland), already went through an examinership process in 2016, during which many of its leases in this State were restructured. The group’s main landlord in Ireland is the Roche family who used to own Roches Stores, before selling it to Debenhams during the last boom.

Mr Ashley tried to take full control of the Irish division during the 2016 examinership, but the company was restructured instead under a proposal put forward by its UK parent.

The administration is the culmination of a months-long battle between Mr Ashley, whose Sports Direct International owned about 30 per cent of Debenhams, and lenders seeking to protect their investment in a £720 million debt restructuring. The two sides failed to come to an accord even after Mr Ashley improved a last-ditch proposal to salvage his stake.

Debenhams’ lenders have been in the driving seat in negotiations since extending a lifeline in February. The company gave Mr Ashley an ultimatum last month to commit to a restructuring on creditors’ terms or risk completely losing his investment.

The creditor group has included Barclays and Bank of Ireland Group, along with hedge funds Alcentra and Silver Point Capital.

A prepack is typically a court-based process that doesn’t require shareholder approval and allows a company to keep operating as normal, with no risk to jobs or pension holders. It was used by lenders to UK government contractor Interserve Plc last month after US hedge fund Coltrane Asset Management, a major shareholder, resisted a debt plan.

Debenhams is separately planning to close 50 of its 241 stores and reduce rents to tackle the effects of a wider crisis in UK retail that’s claimed household names from department-store owner BHS to the UK arm of Toys R Us. Debenhams has struggled to develop its online business as consumers shift purchases to Amazon. com and other e-commerce providers, with Brexit-related jitters hitting spending.

The company rejected Mr Ashley’s offer to underwrite £200 million of new funding even after the billionaire increased the size by £50 million and asked lenders to write off a smaller amount of debt. His plan was still contingent on being named chief executive officer, a requirement that has been a stumbling block for lenders in the past.

Debenhams has rebuffed all of Mr Ashley’s previous proposals, including two attempts to extend loans, an offer to buy the company’s Danish stores, a possible purchase of Debenhams equity and two offers to underwrite a rights issue.

Talks became heated in recent weeks, with Mr Ashley calling for the board to take lie-detector tests and for the company’s advisers to be “put in prison”. The retail magnate, who bought Debenhams’s rival House of Fraser out of administration last year, also vowed to expose what he said was an insider plot to steer the company into the hands of hedge funds. He led an ouster of Debenhams’s chairman and CEO from the board earlier this year. – Additional reporting: Bloomberg