‘Business as usual’ at Irish Debenhams as group up for sale

Group, which operates 11 stores in the Republic, has been placed in administration 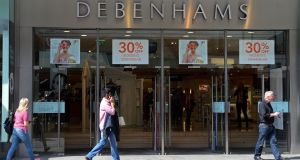 Irish-based staff, customers and suppliers of department store chain Debenhams have been reassured it is “business as usual” after the chain’s UK parent entity was placed into administration.

The entire group, which operates 11 stores in the Republic and a total of 165 across Ireland and the UK, is now effectively up for sale, after its lenders moved to take control of the business on foot of debts of £720 million (€833 million).

Debenhams plc was placed under the control of administrators – similar to insolvency examiners – from UK firm FTI on Tuesday, after the troubled retail chain rejected a financing offer from 30 per cent shareholder Sports Direct, controlled by Mike Ashley.

“The underlying group operating companies are unaffected and all businesses are continuing to trade as normal,” the group said.

The Debenhams group, aside from the plc entity that is in administration, was immediately sold by the administrators to a special purpose vehicle set up by the group’s lenders, which is now the ultimate parent of the Irish operation and the other trading divisions.

Debenhams employs more than 1,600 staff in the Republic, with stores in Dublin, Cork, Galway, Kildare, Kerry, Limerick and Waterford. It had sales of €170 million, according to its last accounts. Several hundred more staff work for concessionaires that operate within Debenhams stores.

Gerry Light of the trade union Mandate, which represents the vast bulk of Debenhams’ Irish staff, said there were a lot of “worried people” working there at the moment, given the fact that the Irish business is now effectively up for sale, along with the rest of the group.

It is expected that the administrators running the business on behalf of the banks will seek rent reductions from UK landlords.

The Irish arm, Debenhams Retail (Ireland), already went through a similar examinership process in 2016, during which many of its leases in this State were restructured. The group’s main landlord in Ireland is the Roche family who used to own Roches Stores, before selling it to Debenhams during the last boom.

“Whatever cutting has to be done in the Irish operation, you’d think it was all done back then,” said Mr Light. He said the union wrote to management on Tuesday afternoon and may seek a meeting.

Mr Ashley tried to take full control of the Irish division during the 2016 examinership, but the company was restructured instead under a proposal put forward by its UK parent.

The current administration is the culmination of a months-long battle between Mr Ashley and lenders seeking to protect their investment in a £720 million debt restructuring.

The two sides failed to come to an accord, even after Mr Ashley improved a last-ditch proposal to salvage his stake.

Sports Direct announced on Tuesday that it had dropped a mooted proposal to buy the business, although it could still submit a bid to the lenders as part of the new sale process.

Mr Ashley criticised British politicians, whom he said “fiddled while Rome burned”, for standing by as Debenhams slid into insolvency. He said it was a “national scandal”. – Additional reporting: Bloomberg