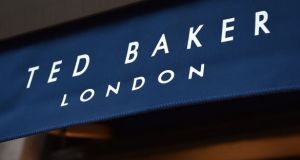 The Ted Baker company said it would not comment on the specific allegations made against Ray Kelvin, who has denied all allegations of misconduct and remains the biggest shareholder

Ted Baker said on Thursday it has ended an independent investigation into allegations of misconduct involving its founder, Ray Kelvin, and the fashion retailer’s policies and handling of employee grievances.

Mr Kelvin resigned in March after an investigation into “forced hugging” and “a culture that leaves harassment unchallenged” was launched.

After Mr Kelvin stepped down, the investigation’s focus turned to the company’s policies, procedures and handling of human resource-related complaints, identifying several areas for improvement.

Ted Baker said it would not comment on the specific allegations made against Mr Kelvin, who has denied all allegations of misconduct and remains the biggest shareholder. The company said it had renewed training for all employees on HR policies and procedures and on acceptable workplace conduct. It was maintaining an independent and confidential whistleblowing hotline and “enhancing the oversight” of both people and culture matters of the board.

“We are determined to learn from this process and, moving forward, cultivate a better environment for all employees where they always feel respected and valued,” executive chairman David Bernstein said.– Reuters