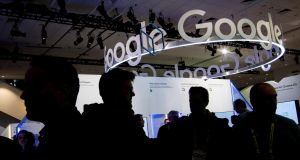 More than 900 Google workers have signed a letter objecting to the tech giant’s treatment of temporary contractors, in what organizers are calling “an historical coalition” between Google’s full-time employees [FTES]and temps, vendors and contractors [TVCs].

In March, Google abruptly shortened the contracts of 34 temp workers on the “personality” team for Google Assistant – the Alexa-like digital assistant that reads you the weather, manages your calendar, sends a text message, or calls you an Uber through your phone or smart speaker.

The cuts, which affected contractors around the globe, reinvigorated the debate over Google’s extensive use of TVCs, amid a growing labor movement within the company. In recent months, Google FTEs and TVCs have been increasingly vocal in protesting both their working conditions and the ethics of their employer.

“For years, Google has boasted of its ability to scale up and down very quickly, and [sic] vocal in its ability to ‘navigate changes with agility,’” the letter reads. “A whole team thrown into financial uncertainty is what scaling down quickly looks like for Google workers. This is the human cost of agility.”

The TVCs on the personality team describe themselves in the March 27th letter as “the human labor that makes the Assistant relevant, funny, and relatable in more than 50 languages”. They are responsible for coming up with the Assistant’s not-too-groan-inducing jokes as well as the tone and content of more serious questions.

If you ask the Assistant if it is a ghost, it will respond, “Boo!”. If you ask it “Who made you?” it says: “I was made by a team of people at Google”.

TVCs make up 54 per cent of Google’s global workforce, and more than half of the people on the personality team, according to the letter. The TVCs on the personality team sit alongside Google FTEs in offices around the world, but are employed by a staffing agency on contracts ranging from two to six months at a time.

On March 8th, about 80 per cent of the TVCs on the team – 34 people – were informed that their contracts were ending ahead of schedule, either on April 5th or, in a few cases, on July 31st, according to the letter.

The layoffs took place around the globe, starting in Seoul, and hitting London just as TVCs in New York were heading to work.

“During the process, our managers and the full-time workers on our team were silent,” the letter states. “Google told them that offering support or even thanking us for years of work would make the company legally liable. Our teammates were told to distance themselves from us at the moment when we were most in need – just so that Google could avoid legal responsibility.”

A spokeswoman for Google noted that temporary workers were allowed to apply for full-time jobs, had received a minimum of four weeks notice, and could potentially receive another assignment from their staffing agency.

“Temporary workers join our workforce when we need to ramp up quickly for projects,” the spokeswoman said in a statement. “When particular projects mature, we work to transition temp and vendor roles to regular full-time employee roles.”

The spokeswoman declined to provide information about what, if any, transition assistance it was providing.

One of the fired TVCs, who spoke on condition of anonymity, said she learned of the layoffs from a colleague in London, but did not get the official word for many hours.

“By the time I got the news at 4.30pm at the NYC office, I was already in agony and very stressed.”

I don’t even have insurance

That TVC had a contract through the end of May, but will now be out of work as of April 5th. “The moment you say you work for Google, people think you are rich,” she said. “They don’t know that I don’t even have insurance.”

Rachel Miller, another of the TVCs on the team who was not fired as her contract was already scheduled to end on 26 March, was working remotely that day but experienced the Googlers’ silence in the team’s chat room.

“It was just really eerie and sinister,” she said. “You would see them pop up and see what was written... We knew they were there.” Miller stressed that she did not blame the Google employees, but management for creating the two-tier system.

A 32-year-old writer from Brooklyn, Miller said that she and the other TVCs on the team were inspired to protest against their treatment by Google by recent worker organizing in digital media.

“We read about how folks at Buzzfeed rallied to get vacation payment and sick days for people laid off,” she said. “We don’t have sick days and vacations, so there’s not much we can ask for except for asking for our contracts to be respected.”

That desire for respect defines the letter’s three demands. The TVCs asked Google to “respect our contracts” by paying out the remaining length of contracts for those whose terms were shortened; “respect our humanity” by allowing FTEs to “openly empathize” with fired TVCs; and “respect our work” by converting TVCs to full-time status.

After the letter began circulating inside Google on March 27th, a Google manager did respond to the second demand, telling Google FTEs in an email: “I know many of you work with our temps and it’s important that you feel able to express your compassion for them, so please do.”

“That’s a win,” said Miller of the email from management. “It’s not a policy change. But it’s a win.”

1 Ireland has fifth-largest number of billionaires per capita in the world, says Oxfam
2 Companies should not use the climate crisis as a scapegoat
3 Irish billionaires, Hogan goes to Davos, PTSB’s CEO race and Ibec’s election wishlist
4 PTSB finance and operations executives vie for chief executive job
5 State-backed Finance Ireland weighs stock market flotation in 2020
6 Irish rents see second-highest increase in the EU since 2007
7 ‘The only time I saved money was some coins in my first piggy bank’
8 Chris Johns: Ireland risks populist culture war over property and pensions
9 ‘Life in Vilnius reminds me of Ireland in the 1990s’
10 Azure seeks to protect Ireland against medicine shortage
Real news has value SUBSCRIBE