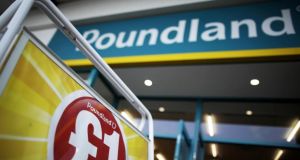 Steinhoff, owner of Dealz and Poundland stores in Ireland and the UK, had planned to seek approval for payouts to board members as a reward for trying to keep the company afloat. Photographer: Bloomberg

Steinhoff International Holdings has shelved a plan to pay director bonuses after legislators questioned whether it was appropriate to release extra funds given the retailer has lost more than 90 per cent of its market value amid an accounting scandal.

The owner of Dealz and Poundland retail stores in Ireland and the UK, Conforama in France and Mattress Firm in the United States was planning to ask shareholders to approve payouts to board members including chairman Heather Sonn as a reward for their work trying to keep the company afloat.

Steinhoff shares plunged in December after the retailer reported accounting irregularities, prompting urgent attempts to shore up the balance sheet and appease lenders.

South African legislators urged Steinhoff not to pay the bonuses last week, in light of the value lost to investors. Shareholders of the Frankfurt- and Johannesburg-listed company are to meet on April 20th in Amsterdam to vote on a range of proposals including the appointment of a supervisory board.

“It is apparent the motivation behind the proposals for additional one-off payments and for additional meetings has not been fully communicated,” Steinhoff said in a statement. “It should be noted that the directors concerned contributed significant time, in some cases on a daily basis for weeks on end up until the present day.”

The company was planning to pay Steve Booysen, who has been a Steinhoff director since 2009, an extra €200,000. Mr Sonn and fellow board member Johan van Zyl were due to be paid €200,000 and €100,000 respectively. The trio are part of a crisis team put together by Steinhoff to help resolve the challenges caused by the scandal, though all three were on the board while the events that led to the crisis took place.

“That the proposal to increase the remuneration of certain independent directors, who seem to have been asleep at the wheel during what may turn out to be the biggest corporate scandal in the history of this country, was made at all, was a spectacular failure of judgment,” David Maynier, shadow finance minister, said in emailed comments. – Bloomberg