Blow Salons expands from traditional Dublin 4 base to Henry Street 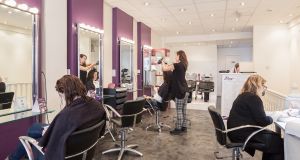 Dunnes Stores has opened an in-store hair and beauty salon at one of its outlets in a move to diversify its offering to consumers following recent partnerships with leading Irish designers.

The family-owned grocery retailer has teamed up with Blow Salons, which opened the concession at the company’s Henry Street store on Tuesday.

“We enjoyed a very busy day yesterday,” said Noelle McCarthy, the founder of Blow Salons, who said she was approached by Dunnes some time ago.

The move by Blow is its first into the northside of Dublin following a spate of openings around Dublin 4 since its foundation in 2002. The strength of the brand, Ms McCarthy says, was something she feels was an attraction to the retailer led by Margaret Heffernan.

Blow isn’t the first outlet in the area as Dunnes’s fellow retailers, Arnotts and Penneys, both have salons in their outlets.

The Blow Salon brand has been examining growth opportunities over the past two years as confidence returned to consumer spending patterns. The company is looking at new outlets in its core market but says it is also actively pursuing opportunities in Portugal.