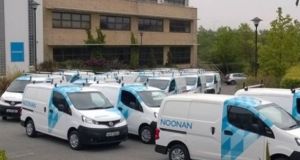 Noonan Services, the Dublin-based facilities management and contract cleaning company, has been sold to South African conglomerate BidVest for € 175 million, marking its second change of control in a decade.

Noonan Services, the Dublin-based facilities management and contract cleaning company, has been sold to South African conglomerate BidVest for €175 million, marking its second change of control in a decade.

BidVest is buying out London-based private equity firm Alchemy and Noonan’s management’s combined 100 per cent stake in the company, the company said in a statement.

Noonan Services, which was set up in 1977 by Limerick man Noel Noonan to provide contract cleaning services to both the Irish public and private sectors, had seen its revenue treble to more than € 300 million since its takeover by Alchemy in 2008, as it expanded in Ireland and the UK. The group, which is also involved in security, technical and environmental services, employs over 13,000 people.

The company, whose clients range from AIB to hospitals and sports stadiums, now generates 40 per cent of its revenue in the UK.

Mr O’Donogh said that Johannesburg-listed BidVest is committed to the long-term growth and development of the company.

“We look forward to working with them in realising our joint ambition for the business and to capitalise on the significant opportunities in our sector and key markets,” he said.

While The Irish Times had previously reported that the European arm of Miami-based private equity firm HIG Capital was also among three final bidders for Noonan, sources said last month that talks with Bidvest, advised by Investec in Dublin, were most advanced.

In 2014, Noonan Services bought Resource Group, a Northern company employing more than 6,000 people across the UK that was in administration at the time.

More recently, the group acquired the security services business of Brinks in Ireland last year, while it snapped up the business and assets of UK security firm Shield Guarding earlier this year from Indian company Topsgrup.

“This is a very exciting and ground-breaking acquisition for BidVest,” said Lindsay Ralphs, chief executive of Bidvest, whose business spans freight to car services. “We have said that we intend pursuing a strategy of acquisitions that will provide geographic diversification for certain of our core businesses. This acquisition achieves that objective.”

Bidvest, which spun off its food service division Bidcorp in a stock exchange listing last year, expects the deal to close at the end of August, subject to approval from the South African Reserve Bank.