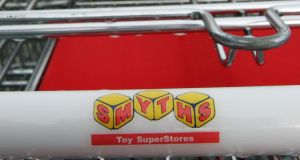 Smyths Toys has agreed to pay up to €79 million for the central European division of Toys R Us, comprising 90 outlets in Germany, Austria and Switzerland.

Smyths, which is privately owned by a family from Mayo and headquartered in Galway, said on Sunday it has entered into a “definitive agreement” to buy the unit, which is being sold as part of the US liquidation of the Toys R Us group.

It said the price includes up to €37 million that may be put into an escrow account upon completion of the deal, “with release subject to certain conditions”.

Smyths is expected to use the deal as a springboard to launch a major expansion of its brand across the continent. The deal immediately catapults Smyths towards the top of the list of the largest speciality toy retailers in Europe.

Upon closure of the Toys R Us deal, Smyths will have a network of about 200 outlets, including about 28 in Ireland, the 90 soon-to-be-rebranded Toys R Us outlets, and more than 80 stores it has opened in Britain over the past decade.

Smyths says the German, Austrian and Swiss stores it has bought were on course to generate earnings of about €22 million this year, after paying royalties and other brand expenses of about €18 million.

The Irish company has unlimited status, and so does not file publicly-available accounts. Based upon the performance of its UK division, it is estimated that total group sales are already about €600 million.

The Toys R Us deal is likely to push the Smyth’s group annual revenues towards the €1 billion barrier, making Smyths, after Dunnes Stores, the most significant privately-owned Irish retailing company.

In addition to expanding its footprint of stores across Europe, it appears Smyths is also limbering up to drive sales at its online division.

On Saturday, when news first emerged that it had reached agreement to buy the Toys R Us unit, group managing director Tony Smyth said he is convinced about the future of “multi-channel” specialist toy retailing.

“[We are] confident that we can successfully introduce and grow our brand in continental Europe. The Toys R Us business is profitable, has a strong leadership team and already has many loyal customers. It provides a great starting point for our expansion,” he said.

The deal is subject to approval from a bankruptcy court in the US. Toys R Us entered bankruptcy protection in the US last September, after racking up debts of about $5 billion. A decision was later taken to liquidate the group.

The UK division of Toys R Us is being shut down and more than 60 stores will be shuttered after a buyer wasn’t found. Smyths could have run into competition difficulties if it bought the UK unit of the brand, due to its own extensive network.

The company is owned by the notoriously media-shy Smyth family, who hail from Claremorris in Co Mayo, where their parents ran a shop. Four Smyth brothers – Tony, Padraig, Liam and Tommy – are involved in the toys business, which in its current guise began in Galway about 30 years ago.