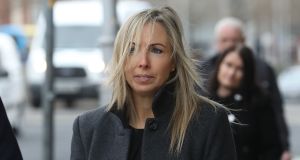 Michael Collins SC, for Data Protection Commissioner Helen Dixon (above), said the Supreme Court should not interfere with the High Court judgment directing a reference to the ECJ over the transfer channels.

Facebook wants to alter High Court findings on issues concerning the validity of EU-US data transfer channels because it “doesn’t like them” and does not want them put before the European Court of Justice (ECJ) , the Data Protection Commissioner (DPC) has told the Supreme Court.

Michael Collins SC, for commissioner Helen Dixon, said the Supreme Court should not interfere with the High Court judgment directing a reference to the ECJ over the transfer channels.

The judgment was an “integral” part of the reference and that was the reason Facebook was so concerned to change the bits of the judgment that it didn’t like, he said.

He was making arguments opposing Facebook’s appeal over an October 2017 High Court judgment by Ms Justice Caroline Costello and her subsequent referral in May 2018 of issues for determination by the ECJ.

The judgment was given in proceedings by the DPC arising from complaints by Austrian lawyer Max Schrems that the transfer of his personal data by Facebook to the US breached his data privacy rights as an EU citizen.

The DPC case was taken against Facebook Ireland – because Facebook’s European headquarters are here – and Mr Schrems but no formal orders were sought against them and the core issue concerned the validity of data transfer channels known as standard contractual clauses (SCCs).

Ms Justice Costello directed a referral to the ECJ of 11 issues concerning the validity of European Commission decisions approving the SCCs.

A core issue in Facebook’s appeal is whether there is any legal entitlement to appeal a referral to the ECJ.

Facebook maintains there is and also disputes several of the High Court’s findings, including that the DPC had “well-founded” concerns, including about “mass indiscriminate processing” of data by US government agencies under the Prism and Upstream programmes authorised there.

It disputes that the US lacks a comprehensive data protection code for EU citizens whose personal data is transferred there. The US government is involved in the appeal as an amicus curiae, assistant to the court on legal issues and its counsel, Eileen Barrington SC, made submissions on Tuesday.

The US government supports Facebook’s argument that no reference to the Court of Justice of the European Union (CJEU) is required in light of the Privacy Shield agreement between the EU and US and the European Commission’s determination that the US ensures an adequate level of protection for personal data transferred under the Privacy Shield.

The DPC’s provisional decision that a legal remedy comparable to article 47 of the EU Charter of Fundamental Rights was not available in the US to EU citizens for any breach of their privacy rights was taken without regard to the Privacy Shield agreement, it was submitted.

In his submissions for the DPC, Mr Collins said Ms Justice Costello fully considered the Privacy Shield issue and found that did not preclude making a reference. She acted entirely within her jurisdiction when making the reference, he said.

In exchanges with counsel, Ms Justice Mary Finlay Geoghegan said it was not disputed that ombudsperson provisions in the Privacy Shield decision apply to SCC transfers but the issue was the effect of those provisions.

Mr Collins said the High Court, for reasons including the ombudsperson is not independent of the US executive and that no person who is wronged can get damages or injunctions, had concerns whether that remedy was comparable to article 47 of the EU Charter.

Whether or not the Privacy Shield applies to the SCCs, there remains the “fundamental” question whether the relevant body of US law provides adequate protection for EU citizens, counsel said.

The appeal is expected to conclude on Wednesday.