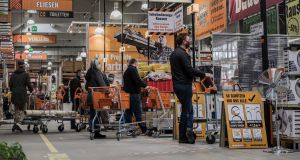 Revolut’s data shows hardware spending, adjusted for user growth, was up 91 per cent on its platform while garden centre spending rose 102 per cent. Photograph: EPA/Christian Bruna

A tentative revival in virus-hit consumer spending may be under way after data from Revolut, a fintech payments platform with more than one million Irish users, showed spending in August was up 4 per cent on the same month last year, the first year-on-year monthly increase since the pandemic began.

The figures from Revolut, which can track consumer spending on its platform to specific sectors, show green shoots appeared in August in select parts of the retail economy – such as household goods and garden centres.

Spending on travel and hospitality, however, was drastically down on the same month last year as anti-virus restrictions continued to constrain the sector.

The monthly Revolut report showed spending on its platform in August on digital content such as movies was up 155 per cent year-on-year, as consumers increasingly settled for entertainment at home over going out. Spending by Revolut users on digital games was up 140 per cent, when adjusted for the platform’s user growth over the year.

Spending in August on household goods and electronics was up significantly, which chimes with financial results reported earlier in the pandemic from retailers such as the Irish arm of Australian furniture-to-televisions retailer, Harvey Norman.

Revolut’s data shows its Irish users in August spent an average of €127 each on household goods and furniture, up from just below €100 a year earlier. Hardware spending, adjusted for user growth, was up 91 per cent on its platform while garden centre spending rose 102 per cent.

Retail industry sources have repeatedly speculated in recent months that Irish consumers, resigned to the fact that the virus will force them to spend more time at home than previous years, are prepared to invest in making their homes more comfortable.

The Revolut data provides the first snapshot into the precipitous decline in hospitality spending in what would normally be the peak month of the year. Month-on-month, spending in restaurants was up 19 per cent over July, and by 37 per cent in hotels, as staycationers gave a small fillip to the sector in August.

But compared to the same month last year, hospitality spending by Revolut was down 33 per cent in August.

The figures are likely to underestimate the overall decline in spending in hospitality, however. The profile of the digital platform’s active users may not fully reflect the proportion of older domestic holidaymakers who traditionally account for a large portion of spending, and who are staying indoors in greater numbers than young people for safety.

“Our data suggesting 4 per cent year-on-year spending growth in August shows that total consumer activity [on Revolut’s platform only] has returned to where it was before the pandemic hit, even if the composition of that spending is different,” said the company.

“As industrial production also continues its recovery, the fact that consumers are still prepared to spend money is a hopeful sign for business prospects in Ireland as a whole.”

1 Admission of mistake in Oxford vaccine dose raises doubts over reliability
2 Intel takes centre stage for Gaga’s Grammy tribute to Bowie
3 Move to EU or face disruption, City of London is warned
4 Cliff Taylor: Deal or no deal we are now heading for a hard Brexit
5 State may face €1bn in compensation in Covid-19 case, Press Up claims
6 Karlin Lillington: How I managed to cut my mobile phone bill by at least half
7 Longboat Clinical acquired in multimillion euro deal
8 Fiona Reddan: Who’s afraid of Revolut? Not AIB and BOI it seems
9 Foxconn to shift some Apple production to Vietnam to minimise China risk
10 Apple’s cash mountain, how it avoids tax, and the Irish link
Real news has value SUBSCRIBE