German supermarket chain says 800 of its 4,300 staff will benefit 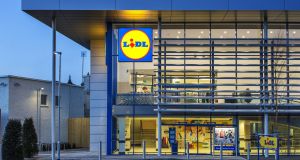 Lidl Ireland has committed to paying staff the updated living wage rate of €12.30 per hour.

The German supermarket chain said the change would benefit 15 per cent or 800 of its 4,300 employees in the Republic, noting that its other staff were on higher rates of pay.

The company, which has 162 shops here, was one of the first supermarket chains to commit to paying the hourly rate as a basic minimum.

Not to be confused with the statutory minimum wage, the living wage is defined by advocates as the minimum income necessary for a worker to meet his basic needs.

A similar commitment is being announced to employees in Lidl Northern Ireland using the UK Living Wage Foundation’s recommended rate of £9.30 per hour.

“As the company continues to steadily grow in the market, it continues to share its success with all employees as well as creating an environment where colleagues’ holistic needs are prioritised including their overall sense of wellbeing,” Lidl Ireland said.

Maeve Mc Cleane, human resources director at Lidl Ireland, said: “We are delighted to be the first major nationwide food retailer to commit to the latest living wage in Ireland.”

“Already, 85 per cent of our team earn in excess of the living wage. However, it is important for us to ensure that those whose hourly pay is below €12.30 benefit from an increase,” she said.

“This would bring them to a level that is more reflective of enjoying a better standard of living,” she added.

According to figures released by Kantar Worldpanel, Lidl currently holds 11.9 per cent of the Irish grocery market, similar to rival Aldi.