Profits dip at Shaws department stores due to exceptional costs 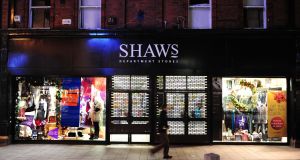 The group operates 17 department stores and the accounts for Shaw & Sons Ltd concern eight of the stores. Photograph: Aidan Crawley

Exceptional costs at the main arm of the Shaw’s department store business contributed to a 77 per cent drop in pre-tax profits to €422,404 last year.

Latest accounts show that family-owned Shaw and Sons Ltd and subsidiaries recorded the drop in profits as revenues dropped marginally to €61.44 million in the 12 months to the end of January 27th last.

The group operates 17 department stores and the accounts for Shaw & Sons Ltd concern eight of the stores.

The company incurred the drop in profits due to €1.1 million exceptional cost that included €640,000 towards the upgrading of the Crescent Shopping Centre at Dooradoyle in Limerick.

Shaws has multiple family members from three generations working across the business. Almost 1,000 staff are employed across the Shaws group and the directors state that they are happy that the group performed in line with expectations during the year.

Shareholder funds at the company at the end of last January totalled €42.44 million and included accumulated profits of €30.45 million.

The profit takes account of non-cash depreciation costs of €1 million.

Separate figures show that a connected Shaw firm that operates four department stores and Hadden’s Shopping Centre in Carlow recorded a 4.5 per cent drop in pre-tax profits to €477,193.

The figures show that W & G Hadden Ltd also recorded a marginal decrease in revenues from €15.94 million to €15.7 million.

Numbers employed reduced from 114 to 112 as staff costs totalled €4 million.