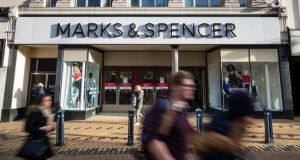 British retailer Marks & Spencer said its performance over the key Christmas quarter was held back by waste in its food business and weak sales of menswear and gifts, sending its shares sharply lower.

The “disappointing one-off issues” overshadowed M&S reporting a rise in quarterly underlying sales for its overall UK business for the first time since 2017.

Shares in the group were down 7.3 per cent in early trading, extending losses over the last year to 24 per cent.

M&S, one of the best known names in British retail, said its overall UK like-for-like sales rose 0.2 per cent in the 13 weeks to December 28th, its fiscal third quarter.

Like-for-like food sales rose 1.4 per cent, ahead of analysts’ average forecast of a 1.1 per cent increase. Clothing and home sales on the same basis fell 1.7 per cent, below consensus expectations of a 0.8 per cent decline but much better than the previous quarter’s 5.7 per cent fall.

M&S set out on its latest “transformation” plan shortly after retail veteran Archie Norman became chairman in 2017 to work alongside chief executive Steve Rowe, who has been with the company for 30 years and became its boss in 2016.

“As we drive a faster pace of change, disappointing one-off issues - notably waste and supply chain in the food business, the shape of buy in menswear and performance in our gifting categories - held us back from delivering a stronger result,” said chief executive Steve Rowe.

He said the firm had delivered an improved performance in the quarter across both main businesses.

Mr Rowe said the food business had continued to outperform the market, while clothing and home had a strong start to the quarter, albeit this was followed by a challenging trading environment in the lead up to Christmas.

M&S said its full year guidance was unchanged, although gross margins were expected to be around the lower end of guidance, largely offset by cost reductions.

Prior to the update analysts were on average forecasting a full year 2019-20 pretax profit of £464 million (€544 million)- that would be a fourth straight year of decline. A decade ago, M&S made a profit of £1 billion. – Reuters