Part of burger chain Eddie Rocket’s flips into the red

Group implemented a ‘complete restructuring’ of its operations in 2019 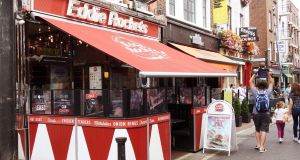 In 2018, Eddie Rockets (Ireland) recorded a €2 million increase in its overheads. Photograph: iStock

One of the main cogs in the Eddie Rocket’s restaurant empire recorded a sharp drop in profitability last year, ahead of a total reorganisation of the group.

Accounts for 2018 have been filed for Eddie Rockets (Ireland), which operates some of the group’s 51 outlets and is the franchisor for some others.

Historically, this entity has captured close to 60 per cent of the wider group’s business, which is wholly owned by founder Niall Fortune and his wife Anne Fortune.

The swing would have been even more pronounced only for the fact that the prior year’s results were dampened by a €1.4 million impairment charge in its accounts, which depressed the 2017 profits.

In 2018, Eddie Rockets (Ireland) swallowed a €2 million increase in its overheads, while another €1 million went on higher trading costs. The entity still had €4.8 million in shareholders funds on its balance sheet, however.

A note to the accounts say the wider group had a “complete restructuring of its operations” in 2019, which filings suggest took place in February. The group says it negotiated “new bank facilities” and restructured the various Eddie Rocket’s companies under a new apex entity, Eddie Rockets Global.

Filings show that the this new parent division acquired the Fortunes’ shares in one group entity, which appeared to own some of the franchising intellectual property, at a value of €11.5 million in February.

The Eddie Rocket’s Group celebrated its 30th birthday this year. Throughout almost all of that time it was run by Mr Fortune, but at the beginning of the year he stepped back to become chairman and he hired Adrian Crean, who used to run McDonald’s in Ireland, as managing director to run the Eddie Rocket’s operations and spearhead its expansion into new markets such as Germany.

However, Mr Crean quit the group in the summer after just six months in the role. Eddie Rocket’s reportedly said Mr Fortune would take the reins running the group once more.

Weeks before he quit, Mr Crean told The Irish Times that it was in discussions with potential partners to expand in Germany, where it already has a deal with a local group called Area. It has signed up to open 16 outlets, which will mostly be situated in transport centres such as rail stations.