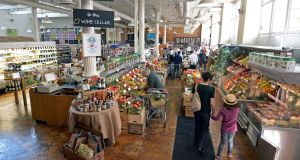 Fallon & Byrne, which has annual sales of around €15 million and employs 350 staff, earlier this year signed a new 25-year lease on the building following negotiations with Eir

The well-known food hall and restaurant group, Fallon & Byrne, has run into opposition over its plans for a major extension to its flagship store on Exchequer Street in Dublin.

An appeal has been lodged with An Bord Pleanála against the recent decision of Dublin City Council to grant planning permission for a three-storey extension to incorporate two new outdoor terraces for Fallon & Byrne’s existing restaurant and function room.

The proposed development represents an extension into a service courtyard which is primarily used and managed by the telecoms group, Eir, which leases the building to Fallon & Byrne.

The objection is being made by Burlington Real Estate, the owners of an adjoining office block, the Central Hotel Chambers Building, on the corner of Exchequer Street and Dame Court.

It claims the first-floor extension will have “significant adverse impacts” on its property in terms of overlooking, daylight, noise and disturbance and would result in a loss of privacy and amenity as well as depreciate the value of the building.

In April, Fallon & Byrne hired Goodbody stockbrokers to raise about €6 million of fresh capital to fund the group’s expansion plan which aims to double its existing size over the next five years.

A key element of the plan is the proposed extension to its premises on Exchequer Street as well as a new retail outlet at Connolly Station.

Fallon & Byrne, which also operates a restaurant and food hall in the Swan Centre in Rathmines and a restaurant in the People’s Park in Dún Laoghaire, is also planning a new store as part of a proposed extension to Dundrum Town Centre in south Dublin.

The business, which was established by property developer, Paul Byrne and his wife, Fiona McHugh, a former editor of the Irish edition of the Sunday Times, said it required new space to allow it to further develop its flagship outlet. The group said its ground floor retail store was restricted by its current size, while its restaurant and function room on the upper floors had the potential to grow.

It claimed the expansion would allow it to provide more variety in its deli and butcher counters and to extend its restaurant by 92sq m together with a 127sq m roof terrace.

Fallon & Byrne, which has annual sales of about €15 million and employs 350 staff, earlier this year signed a new 25-year lease on the building following negotiations with Eir.

In granting planning permission Dublin City Council concluded the proposed development would “upgrade an established city centre restaurant and contribute to the animation of the area” and would not seriously injure existing buildings in the surrounding area.