Clothes viewed from the sofa and metal straws among big sellers 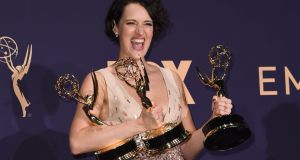 Emmy-winning Phoebe Waller-Bridge’s elegant anti-hero resulted in a “Fleabag effect” with sales of black jumpsuits up 66 per cent. Photograph: Getty

The sofa has become the new fashion front row, with cult television shows such as Fleabag, Peaky Blinders and Stranger Things heavily influencing what UK consumers bought in the past year.

The return of charismatic Birmingham gangster Tommy Shelby (played by Cillian Murphy) in BBC One’s Peaky Blinders sent sales of flat caps up by a quarter in John Lewis, while Phoebe Waller-Bridge’s elegant anti-hero resulted in a “Fleabag effect” with sales of black jumpsuits up 66 per cent. Devotees of the 1980s-set Netflix hit Stranger Things sought to emulate the show’s retro styling, with sales of slim fit Levi’s up 8 per cent.

The TV-inspired trends are revealed in the latest John Lewis retail report, an annual exercise in which the department store identifies the key trends of the year and the items that have passed their sell-by dates – a list that for 2019 includes drones and mantel clocks.

Another example of the small screen having an impact on shoppers was in homewares, where consumers rushed to buy decluttering paraphernalia after watching Tidying Up with Marie Kondo. The lifestyle guru, who encourages people to purge clothes that don’t “spark joy” and to fold and box up the ones that do, fuelled a 47 per cent increase in sales of storage containers.

The report’s seventh edition comes at a difficult time for the employee-owned retailer which is part of the same group as Waitrose. The company slumped to its first ever half-year loss last month as weak consumer spending was compounded by rising costs. It has announced it is merging the management of the department stores and the supermarkets to cut costs.

Tough economic times often result in the so-called “lipstick effect” – when shoppers reduce spending on expensive designer items but splurge on cheaper luxuries instead – and the report says sales are 16 per cent higher than last year.

John Lewis’s trading director, Simon Coble, said the report helped it to adapt its ranges and “remain relevant to customers’ lives”. This year, the study revealed greater concern about the environment, especially single-use plastic. Travel mugs and reusable water bottles are now considered standard issue and shoppers are experimenting with collapsible coffee cups, reusable beeswax sandwich wrappers and travel cutlery. Sales of carry-around knives and forks, to use instead of plastic versions, are up 176 per cent.

The decision to ban plastic straws and drink stirrers from sale in England next year has pushed sales of reusable versions up more than 1500 per cent, with shoppers buying cheaper stainless steel ones or splashing out on silver, which come in a carry case and cost £8 (€9.25).

In a possible sign that the political turmoil is taking its toll on the UK population, John Lewis said sales of Lego sets aimed at adults were up by a quarter. The toymaker has released a mindfulness book called Build Yourself Happy: The Joy of Lego Play and construction projects range from the Central Perk café from the sitcom Friends to a Vestas wind turbine.

Many of the products that are on their way out have fallen foul to advances in technology. Sales of landline phones have nearly halved in five years while camcorders are practically a “non-existent” market, it said. Sales of mantel clocks are in freefall, usurped by smartphones and voice controlled speakers.

The store has also stopped selling drones after sales plummeted in the wake of the drone attack that disrupted Gatwick airport last Christmas. – Guardian service