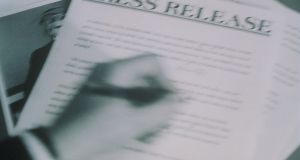 Profits at PR firms Murray and Teneo rose, according to the companies’ latest accounts. Photograph: Getty

Proof that the PR sector is in rude health comes with newly filed accounts for some of the industry’s biggest players.

Murray Consultants, whose clients include Tesco, Audi, Hibernia Reit and BHSL, reported a 13 per cent rise in pretax profits to €708,142 last year.

Gross profit was up 12 per cent on the back of turnover of almost €4.8 million.

Managing director Pat Walsh said a good flow of new business and projects had continued into 2017.

“We’re very pleased to have delivered a very strong operating performance and that investment in digital and creative services is delivering new and sustainable income streams. 2017 is shaping up for another strong year with high levels of M&A and corporate activity across our client base,” he said.

Murray Consultants, which was founded in 1974, employed an average of 25 people last year with staff costs edging up to €2.14 million from €2.12 million.

Elsewhere, Teneo PSG, which rebranded from PSG Communications earlier this year following its acquisition by the New York-based executive advisory company Teneo Holdings in 2016, also had a profitable year.

Abridged accounts recently filed that cover the period including the acquisition, show the company reported a €218,954 profit for the 12 months to the end of last December. This took accumulated profits up to €2.5 million from €1.96 million a year earlier.

Teneo, which was co-founded by Irishman Declan Kelly in 2011, bought PSG for an undisclosed sum in July 2016.

PSG was founded in 2014 following a merger between Irish PR firms Pembroke Communications and Slattery Communications. The company has a number of divisions covering sponsorship, digital, sports and corporate and public affairs.

The PR firm, whose clients include Unilever, Samsung, Netwatch, Bord Gais Energy, Aer Lingus, Repak and Teeling Distillery, has recorded an average 15 per cent growth per annum over the last couple of years.

“We are very satisfied with our 2016 results and have continued to grow and expand at a significant pace in 2017 and we are grateful to our clients who have enabled this growth,” said Michael O’Keeffe , Teneo PSG chief executive.

The company employed an average of 57 people last year with staff costs coming in at €3.6 million, up from €2.9 million in the previous year.

Less positively, the Irish arm of Fleishman Hillard International, whose clients include Allianz, Fitbit, Grant Thornton, SAP and Teva, record a sharp fall in pretax profits last year, which fell to €295,742 from €530,398.

The company employed 30 people with staff costs falling to €2.75 million, down from €2.8 million a year earlier.