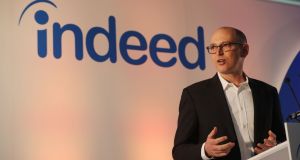 Indeed president Chris Hyams: “What has drawn us to Dublin is the incredible diversity in the workforce.” Photograph: Niall Carson/PA Wire 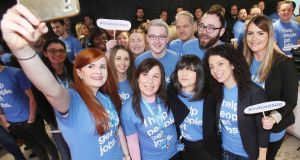 Staff take a selfie at the Indeed EMEA headquarters in Dublin after it announced plans to expand. Photograph: RollingNews.ie

“I told them it was a dumb idea, it would never work.” Now, however, Indeed president Chris Hyams says he may have been wrong about an idea suggested by three graduates and recent employees of the recruitment company.

The idea was to take those jobs that never make it online – the “Help wanted” signs in windows, posting on bulletin boards and so on – into the company’s job search, essentially crowdsourcing the whole operation.

It wasn’t a new idea at Indeed, Hyams says, although the trio had no way of knowing that. In fact, it had been looked at a few times by the company and its experts, complete with MBAs, and rejected as unworkable.

“They listened to what I had to say. And then they went ahead and did it anyway,” Hyams says. It was, he says, the most powerful lesson he has learned.

That was the beginning of Job Spotter, an app that has been launched in the United States, Australia and Britain. So far, more than 140,000 people have posted 800,000 jobs to the app.

“They listened to what I had to say. And then they went ahead and did it anyway

The service works like this: you see a “Help wanted” sign, you take a photo of the sign and the building and upload both to the Job Spotter app. Once the job is verified and is confirmed as not already posted on Indeed, the submitter earns points that can be put towards gift cards, such as vouchers. There is a leaderboard that can earn the top submitters extra cash for their Job Spotter wallet each month.

The creators of the initial idea were three 22-year-olds who spent weeks biking around Austin during the height of the Texas summer capturing and uploading all the “Help wanted” jobs ads they found for the project, which was part of Indeed University.

Indeed University is a 12-week programme for the company’s new hires, or Indeedians, as the company calls them. The course is intended to give them an idea of the company’s development culture, throwing them into creating their own businesses, rather than sitting in classrooms to learn about Indeed. Started in the summer of 2015, it operates at Indeed’s headquarters in Austin, Texas, taking in software engineers from Seattle, Tokyo and San Francisco.

Job Spotter doesn’t earn any money for Indeed. In fact, it costs the company money thanks to the vouchers scheme and the development time for the service. It’s more about creating a resource for jobseekers that will bring more of them to the site which, in turn, brings recruiters who may actually spend money on some of Indeed’s premium services.

That’s how Indeed operates. Jobs can be posted on the website free of charge for employers, and jobseekers can access the listings without paying. There are 16 million on the website.

Indeed has a number of ways of raising revenue. Sponsorship – essentially promoting your company’s vacancies – is one. The newest product Indeed Prime is another one and is focused on a challenging aspect of hiring: getting technical talent, which is a major problem for tech companies today.

It was designed to solve some of the problems that Indeed itself was experiencing. It includes a CV search for highly qualified candidates who are considering a move, who are willing to relocate and who are open to moving, and what they expect by way of salary.

It means companies have a targeted base to which to pitch offers, and jobseekers can be sure that they are getting approaches that fit their requirements.

Founded in 2004, Indeed came to Ireland in 2012, opening its EMEA headquarters with 50 people. Working from a serviced office in Dublin city centre, Indeed has grown from its humble beginnings to employ hundreds of people in the State. In 2015 the company committed to recruiting an additional 300 people over two years; it reached that target ahead of time.

This week, Indeed announced plans to double its workforce in Ireland over the next three years, from 500 to 1,000 staff, a major boost for the labour market here and a source of relief after the events of recent months.

US companies are still investing here despite fears that the money would dry up. Brexit and the election of Donald Trump may have sent shockwaves through the industry and created a degree of uncertainty, especially when it comes to tech companies, but Hyams says there will be no row-back of Indeed’s plans for its European headquarters.

“The reason we came to Dublin and the reason we continue to invest further is that we run all of our EMEA operations from Dublin. What has drawn us here is the incredible diversity in the workforce,” says Hyams.

Indeed has 19 nationalities working at its Dublin office, with more than a third of its staff coming from outside the State. He expects that will be the same for its new intake of employees, given the type of positions it will be seeking to fill: sales, client services, HR, business development, marketing, finance, strategy and operations.

Hyams addresses another concern for Irish industry: the effect that a drastic reduction in corporation tax proposed for the UK could have on investment here. Indeed has an office in London, but Hyams says it deals only with that market, and there are no plans to have it supersede the Irish office. In fact, the post-Brexit climate showed some interesting trends at Indeed.

“In the 72 hours after Brexit vote was announced, the searches from the UK to Ireland went up by 250 per cent; even more interestingly, all the searches from other EU nations to Ireland also went up – by 220 per cent,” says Hyams. He says Ireland is the only other primarily English-speaking market in the EU that is also open and with what he considers a great quality of life and cost of living.

“That job-seeker behaviour suggests that Ireland might be a beneficiary of what’s going on with Brexit. It certainly doesn’t change our plans at all,” he says.

The recruiter plans to continue its development in Ireland and overseas. Hyams isn’t ruling out further expansion at the Dublin office once the 500 new jobs are filled. New products will almost certainly be on the cards, and more may come from those Indeed University programmes.

For every Indeed Prime, there are nine more experiments that fail, Hyams says. But Indeed will keep at it.

“It’s very easy for a company that is successful to think they can just rest on that success. We’ve just never stopped running at full speed. The greatest enemy to innovation is certainty. It’s easy to fall into the trap of thinking you know all the answers,” says Hyams.