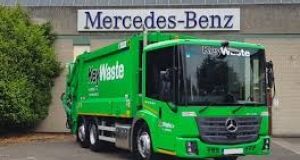 Key Waste, which is headquartered in Walkinstown in Dublin, may be worth up to €50 million

Key Waste, one of the State’s largest waste firms, reported a 16 per cent increase in turnover to €20.7 million last year. The company is reportedly the subject of a bidding war involving rivals City Bin, Greyhound Recycling, Thorntons Recycling and Panda.

It is estimated the company, which is headquartered in Walkinstown in Dublin, may be worth up to €50 million. According to its most recently filed accounts, profits fell to €2.1 million last year, down from €3.2 million previously. The fall-off related to administrative expenses, which rose to €5.8 million.

The company, which employs 100 staff, is jointly owned by Neville O’Boyle and Mark Butler, and has more recently diversified into commercial waste, general skip hire and hazardous waste services.

The company also recently the one millionth tonne of residual waste to the Poolbeg incinerator facility in Dublin’s Ringsend.