Corkman is not well known in UK retail, but acquaintances say he will silence doubters 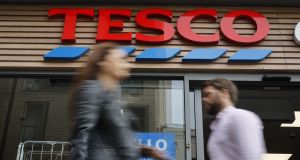 Murphy will have to win over some sceptical observers when he takes over the biggest job in UK grocery retailing, replacing the outgoing Dave Lewis. Photograph: Tolga Akmen/AFP via Getty Images

“Ken who?” sneered one London financial analyst, after low-profile former Boots executive Ken Murphy was named as the next group chief executive of Tesco on Wednesday. It seems a trifle unfair. But it illustrates how the Cork native will have to win over some sceptical observers when he takes over the biggest job in UK grocery retailing, replacing the outgoing Dave Lewis.

Former associates of Murphy’s, however, believe the Irishman has what it takes to fill the boots of Lewis, who is known as “Drastic Dave”, after he cut costs to drive a turnaround of Tesco from a perilous position in recent years. Compatriots of Murphy’s who have dealt with him in a professional capacity are adamant that he will surprise any naysayers he might have in the City of London.

The Tesco top job is essentially royalty in the UK grocery retailing sector. Market observers thought the next chief executive after Lewis would be a company insider or, at the very least, a grocery big hitter.

Murphy is neither, having spent most of his career selling beauty and health products. After attending University College Cork, he trained as an accountant and entered the consumer goods sector at Procter & Gamble.

He later joined the group that eventually morphed into the parent of Boots, which in recent years hooked up with US giant Walgreens, catapulting Murphy from his base in Nottingham to Chicago, to head up global brands for the combined entity.

He was seen as something of a protege of Walgreens Boots Alliance chief executive Stefano Pessina, for whom he worked at Boots before the US tie-up.

Murphy left the US in December, moving back to the UK with his family. Even though he held a senior role in a huge global retailer, such was his low profile that the move went unreported in Ireland.

By next summer, however, when he takes over from Lewis, the Irishman will be the most famous person in UK grocery retailing. Here’s hoping he is ready.