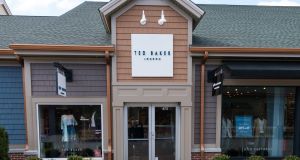 Ted Baker has three shops in the Republic. Photograph: iStock

Shares in Ted Baker shed more than a third of their value on Thursday after the British fashion retailer’s second profit warning in four months on the back of what new boss Lindsay Page called the worst business conditions in decades.

Ted Baker, which has three shops in the Republic, and other high street retailers face several challenges: weak consumer demand brought on by political uncertainty related to the UK’s possible departure from the EU, heavy discounting and the shift to online shopping. Other brands have also complained about a tough climate, although the world’s second-biggest fashion retailer, H&M, reported its first quarterly rise in pretax profit in more than two years on Thursday.

“We have faced probably the most difficult trading conditions that I can ever recall in 30 years,” Mr Page said.

Ted Baker, known for suits, shirts and dresses with quirky details, posted a first-half pretax loss partly due to unseasonably warm weather in September. Yet wider issues plaguing the sector led it to caution that second-half results could be lower, setting its shares on course for their biggest one-day drop. The stock has more than halved in value since Mr Kelvin stepped down.

“Ted Baker has been thrown on to the market’s discount pile after a shocker of a first-half results statement,” said AJ Bell’s investment director, Russ Mould.

The profit warning comes days after fast-fashion retailer Forever 21 filed for bankruptcy in the US, where Ted Baker has more than 30 shops and sells at Bloomingdale’s stores.

In March, Ted Baker reported its first drop in full-year profit since 2008, and in June flagged an “extremely difficult” start to the year as it was recovering from Mr Kelvin’s departure.

Mr Kelvin, who had been chief executive since the company’s launch in 1988, resigned in March over claims he presided over a culture of “forced hugging”. He denied allegations of misconduct. – Reuters

1 How long can Government afford to keep State pension age at 66?
2 Revenue publishes list of companies tapping State for wage support
3 Developers may need to go back to the drawing board as one-beds fall from favour
4 Covid-19 will have a significantly worse impact on UK public finances than on ours
5 Grocery shopping app Buymie delivering for Devan Hughes
6 Cosgrave Property Group secures exit from Nama
7 Bake-off soy sauce tweet backfires for UK trade ministry
8 107 jobs at risk as Broderick’s shareholder considers examinership
9 Irish homeowners must see rates relief if they make it through Covid turmoil
10 Barbie boom, Trump loyalists and a bond king’s latest battle
Real news has value SUBSCRIBE